As expected, the interim public display of the Federal Motor Carrier Safety Administration’s CSA Safety Measurement System saw significant change with the most recent monthly update. Each carrier’s SMS profile now includes in its public view not only inspection/violation information and crash counts, among other data, but also each carrier’s “absolute measure” in five of the seven BASIC categories of analysis. 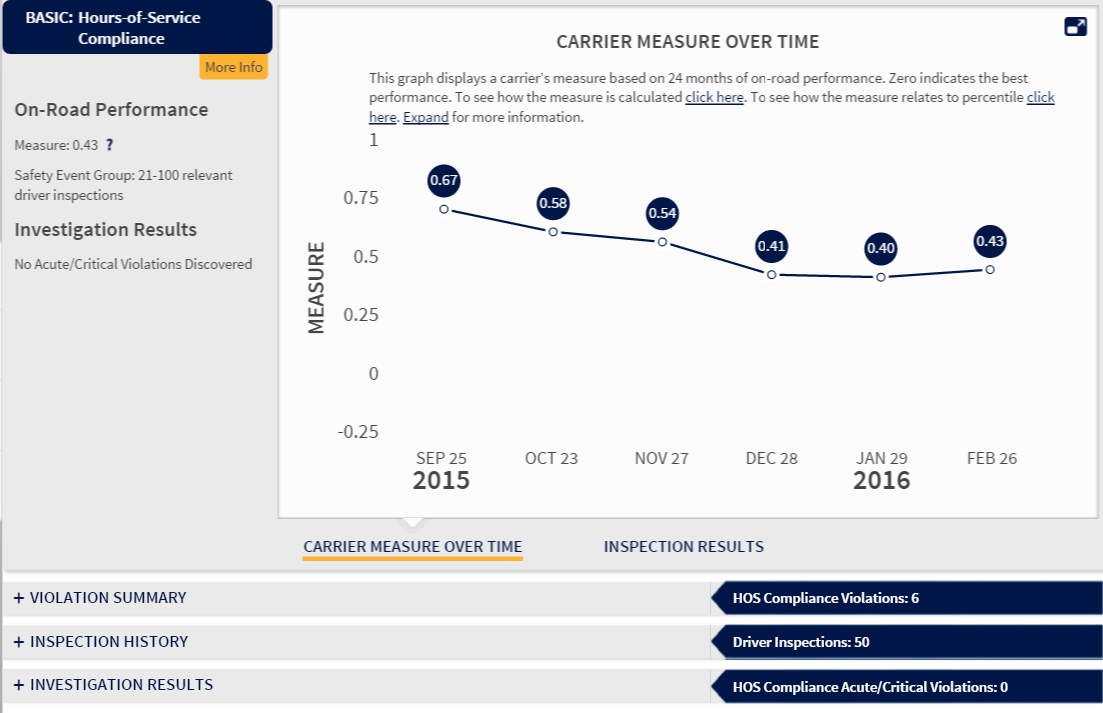 The Hours performance measure as updated today in the CSA SMS for one small carrier.

BASICs that display each measure’s change over time, as illustrated, include the Unsafe Driving, Hours of Service Compliance, Driver Fitness, Vehicle Maintenance and Controlled Substances categories. Measures in both the Crash Indicator and Hazardous Materials BASICs, as with the percentiles in those BASICs prior to passage of the FAST Act highway bill, remain unavailable to the public.

The FAST Act, which pulled all CSA percentiles and BASIC alterts from the view of the public, explicitly allowed for the retention of the absolute measure scores within the public view, as previously reported. In the early going after the CSA SMS became entirely unavailable in December, the measures did not immediately return when the altered system came back online in January. FMCSA officials cited only technical kinks left to sort out at the time, noting all substantive changes had been made.

It turned out, however, that among those technical kinks were some substantive alterations indeed. Carriers absolute measure scores, now publicly available again, amount to each carrier’s categorical grade before the curve is applied, converting them into percentiles, which at least gave the measures some context within peer groups. Some watchers have wondered whether this new scoring world, in which each carrier gets a number that might then simply be compared across the entire universe of carriers’ measures individually or in groups by private entities, is an advantageous interim route for the troubled scoring system as FMCSA contracts for its Congressionally-required studies and program improvements are made over the next year or two.

Without the context of comparative peer groups, the scores could in some ways be even more problematic for the casual observer or interested party with little knowledge of how the SMS works, and problematic for many more carriers who will be casually, nonsystematically compared to their peers.

Time will tell on the question of how parties like brokers, shippers and insurance companies use (or don’t use, as it were) the absolute measures.

It’s clear, at least, that some small carriers continue to be judged on the basis of their now-private percentile rankings. As results below show, more than a third of respondents to this February poll noted they’d experienced a disclosure requirement relative to their private CSA percentiles as a condition of doing business.

Since CSA percentiles were pulled from public view last December, have you been required to supply your private scores?

Got a story to tell relative to your own “absolute measure” scores or percentiles and their use or misuse of late? Tell it in a message on our podcast line at 530-408-6423. If you’re reading on mobile, tap the button below to call.

Be sure to state your name and base location with any message.
Get the business tips, industry insights and trending news every owner-operator needs to know in the Overdrive newsletter.
Read Next