Twice this week, the media has taken their own click bait so seriously they’ve managed to blatantly misconstrue two different stories into a whole bunch of hooey that isn’t true. Shocking, right? 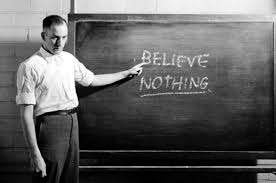 The first rule of consuming news.

First of all, North Carolina State Troopers never said they were pulling people over for one mile an hour over the speed limit. That was never a directive, and according to Sgt. Edwin Forbes in an interview with NewsChannel 3, “That is not accurate, I do not know where the media got that from. I think maybe it was taken out of context from another source. We are going to pull people over, as we have been pulling people over, and we are going to use good judgment.”

Anyone with a lick of sense would understand if they were pulling every vehicle going a mile over the speed limit, they’d have every trooper employed by the state busy every second of every day for time and all eternity, and they still wouldn’t get them all. It’s nonsense, but it makes good headlines, so they went with it.

The second story comes from Emory University, where it was reported far and wide that a bunch of students asked for counseling, claiming they were traumatized after finding pro-Trump messages in chalk scrawled around the campus. Now, this scenario seems a little more believable than the one mile an hour over crap, but once again, it was not reported correctly.

According to our friends over at Snopes, the real story went like this: “Students at Emory University gathered in protest after pro-Trump graffiti appeared overnight; administrators investigated the graffiti as it appeared outside designated areas for chalk markings.” As silly as an investigation over graffiti “appearing outside of designated areas for chalk markings” sounds, that was the extent of the “official” intervention. Counseling was not offered or demanded by anyone, no one was afraid or traumatized, no one felt like their “safe spaces” were violated, and there was not angry protesting over the chalk. But once again, it made good headlines, so the media went with it.

The definition of propaganda: information, ideas, or rumors deliberately spread widely to help or harm a person, group, movement, institution, nation, etc. The definition of journalism: the activity of gathering, assessing, creating, and presenting news. Nowhere should these two intersect in definition. However, in the media of today, true journalism is dead. It’s all about click bait and numbers, and no one cares what the truth is, as long as it sells ad space, or promotes a political agenda that benefits the author or organization they write for.

It’s a sordid business, and one I’m right smack in the middle of every single day. The rampant propaganda spread about trucking is overwhelming, especially when it comes from organizations that call themselves “advocates” for the industry. Do your homework, and make sure the people you know who aren’t affiliated with the industry do theirs.