March came in like a lamb and pretty much stayed that way in terms of national spot freight volumes and rates on DAT Load Boards. Fingers remain crossed for a more typical spring freight season to come, notes DAT’s Ken Harper. “As far as March on the spot market goes, there was no early Spring freight season. Some of the problems were caused by lack of the usual reefer freight in California and Florida, causing reefers to compete with vans for available spot freight: specifically, the rains in California (strange to say that after all the drought) delayed planting and harvesting of typical Spring produce, while infestations of typical Spring ‘reefer crops’ in Florida contributed to the sluggish spot market.”

The wider economy appears to be moving along OK — “slow growth at worst,” Harper says, so “there are reasons to be optimistic we’ll see the uptick in spot freight and rates that usually runs through June or July in a typical year.”

During the week ending March 26, load-to-truck ratios on the spot market and rates never gained much traction — both indicators slipped slightly leading up to Easter weekend.

The national load-to-truck ratio dipped from 3.8 to 3.7 loads per truck during the week, meaning there were 3.7 available loads for every truck posted. A 3:1 overall load-to-truck ratio is associated with a balanced market, which unfortunately rules out any kind of strong competitive advantage for independent carriers.

Dry van
The number of van load posts fell 1 percent while truck posts increased 1 percent for an average van load-to-truck ratio of 1.6. The national average spot van rate fell 2 cents to $1.56 per mile with only 38 of the top 87 lanes experiencing a rate increase.

Reefer
In the reefer market, load posts fell 3% while truck posts added 3% for a reefer load-to-truck ratio of 3.1, down 6%. California, Texas, and southern Florida all experienced stronger seasonal volumes, outpacing slower markets elsewhere as the national average reefer rate fell a penny to $1.82 per mile.

Flatbed
Flatbed volume remained the same compared to the previous week and capacity increased 2%. The load-to-truck ratio dipped 2% while the national average flatbed rate was unchanged at $1.87 per mile.

DAT at the Mid-America Trucking Show

DAT Solutions debuts today a new version of its free DAT Trucker mobile app at MATS in Louisville, Ky.. DAT Trucker is a driver’s trip planner, featuring amenities that include Walmarts for potential parking, CAT Scale locations, and a limited number of locally, geo-targeted loads from the industry’s largest loadboard.

Formerly known as MyDAT Trucker, the new DAT Trucker features a redesigned interface as well as a link enabling users to access all DAT Network loads through DAT’s subscription-based TruckersEdge board. DAT Trucker has garnered more than 750,000 downloads on Android and iOS devices over its history.

MATS attendees visiting DAT’s booth (#65188) can register to win a Cabela’s ATV valued at more than $5,000, as well as Coleman lamps and stoves also provided by Cabela’s. 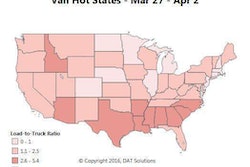 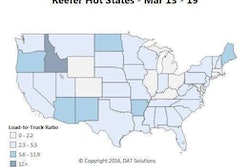 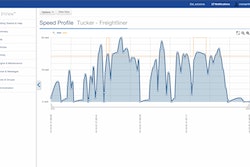 DAT jumps into the e-log market with multifunction platform