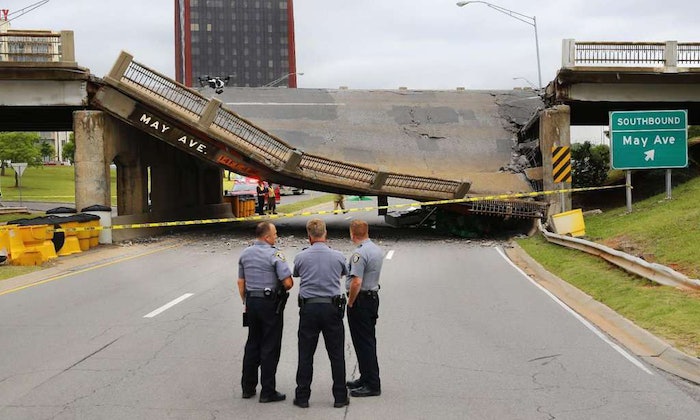 A tractor-trailer brought down an Oklahoma City bridge on top of a state highway after striking it Thursday afternoon.

There were no reported injuries and the driver said that he had cleared the May Avenue Bridge while traveling eastbound on Oklahoma Highway 3 earlier that day, but had struck it later while driving west bound, according to koco.com.

Part of the bridge landed on top of the man’s truck, trapping him until emergency crews arrived and freed him from the wreckage. He walked away without any injuries, foxnews.com reports.

The bridge’s clearance is rated at 14-feet, 8-inches for the eastbound lanes, and is four inches shorter for the westbound lanes, according to news9.com. It’s not clear if signs are posted for the different heights.

The same bridge was last severely damaged in July 1993 when a truck, also carrying a load that was too high to clear it, struck it and sent concrete and metal flying onto cars below. Though the bridge did not collapse, five people were injured, according to The Oklahoman.

Thursday’s collapse at 2:50 p.m. led to the closure of the highway and bridge. Drivers must now take detours until the bridge is either repaired or replaced, which is expected to take several weeks. Given the age and condition of the bridge, one city official told koco.com that it would probably have to be demolished and replaced with a new bridge.