The Federal Motor Carrier Safety Administration has issued a Final Rule to allow certain “vehicle safety technology” to be mounted on windshield interiors, including inside the area swept by the windshield wipers.

The rule, which will take effect Oct. 23, stems from a section of the 2015 FAST Act highway bill that directs FMCSA to amend its regulations to allow for the “voluntary mounting on a windshield of vehicle safety technology.”

Current regulations state that antennas and other devices cannot be mounted more than six inches below the upper edge of the windshield and must be outside the driver’s lines of sight to the road and highway signs and signals. The new regulations add an amendment to allow certain devices, including, but not limited to video event recorders, lane departure warning systems, collision mitigation or warning systems, transponders and sensors that are part of a hands-free driver aid equipment package, to be mounted within the area swept by the windshield wipers.

The devices covered in the amendment must be mounted no more than four inches below the upper edge or seven inches above the lower edge of the area swept by the windshield wipers, and must also be outside the driver’s sight lines to the road and highway signs and signals.

FMCSA clarifies in the rule that the amendments do not mandate the use of any of the aforementioned devices, but only allows the devices to be voluntarily mounted where they would have previously been in violation of the regulations.

Additionally, any windshield-mounted technology under a temporary exemption when the FAST Act went into effect on Oct. 1, 2015, is included in the amendments to the regulations. 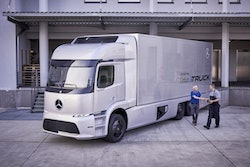