Speed limiting devices like those proposed for an industry-wide mandate by the U.S. DOT are one of the most used fuel-saving devices by carriers, according to a study released last month by the American Transportation Research Institute.

More than 84 percent of carriers surveyed by ATRI said they use speed limiters as a means to increase their fleet’s fuel economy. The survey, which focused on fuel economy trends of heavy-duty truck fleets, also showed use of aluminum wheels, automated-manual transmissions and low-rolling resistance dual tires as the most commonly used tactics by fleets to save fuel. ATRI’s findings on the prevalence of speed limiter usage mirror that of an another ATRI study released earlier this year.

ATRI partnered with the University of Michigan for the fuel economy study. Researchers surveyed 96 fleets that operate a combined 114,500 power units and 350,000 trailers. Of the 96 fleets, 72 were for-hire carriers and 24 were private fleets. Nearly 30 percent run more than 501 trucks, and another 26 percent operate between 101 and 500 trucks. Just shy of 22 percent of fleets surveyed operate 20 trucks or fewer. The remaining 23 percent run between 21 and 100 trucks.

More than 90 percent of respondents reported they use aluminum wheels in their operations as a fuel-saving device. Eighty-four percent said they use speed limiters, and 76.1 percent reported using low-rolling resistance dual tires. Nearly three-quarters of respondents said their fleet uses automated-manual transmissions to save fuel.

Hybrid drivetrain technology, availability for which is limited, is the least used and least desired fuel saving technology, with just 4.4 percent of fleets reporting to use hybrid electric drivetrains and 61.5 percent reporting they “would never use” such technology.

The stats were similar for hydraulic hybrid engines, with 1.1 percent of fleets reporting use and 67 percent of respondents saying they “would never use.”

Reported use of the fuel savings tactics on which readers were surveyed follows the same gradient with nearly every device or strategy: Small fleets reported the lowest rate of adoption while large fleets report the highest. 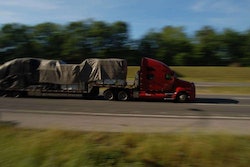