Another autonomous trucking startup company is taking a stab at removing drivers from the truck by solving the issue of final mile delivery through remote control technology.

San Francisco-based Starsky Robotics’ system uses software, front- and side-facing radar and camera systems for autonomous highway driving like other autonomous companies, such as Otto and Embark, but it also puts drivers in an office where they can remotely control the truck from a terminal to its delivery destination.

The company’s co-founder, Stefan Seltz-Axmacher, says the goal for his company is to give drivers more home time and make the job and work environment more appealing – and safer – for potential applicants.

“We’re not anti-trucker,” Seltz-Axmacher says. “A lot of Silicon Valley-types are barely ever talking to anyone who’s ever spent any time on the road. Our sixth employee was a truck driver. We came at this from a trucking-first perspective rather than a technology-first perspective. We’re this uncomfortable mix of a trucking company and a technology company.”

The company developed an aftermarket retrofit kit that robotically controls the throttle, steering and transmission, doing whatever the driver in the office is telling it to do. The driver is able to use data from the truck’s cameras and radar to get a sense of the truck’s surroundings.

“Think of it as a really boring video game. It’s a truck simulator, but with an actual vehicle,” Seltz-Axmacher says. “You’re turning a steering wheel. You’re working the pedals. You basically drive the truck like you would fly a drone.”

Seltz-Axmacher adds, however, that even in autonomous mode, the driver is still in control of the truck, and a remote driver or a driver in the cab can electronically or mechanically stop the tractor.

Last month, the company says it successfully tested its technology on a 140-mile trip with a driver in the truck, operating in autonomous mode approximately 85 percent of the trip, Seltz-Axmacher says. Starsky has yet to heavily test its remote capabilities on the highway, but has tested extensively in trucking yards with successful results, Seltz-Axmacher adds.

For the immediate future, Seltz-Axmacher says the company plans to continue testing with a driver at the wheel but he plans to take drivers out of the truck by year’s end. 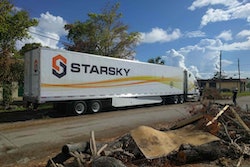 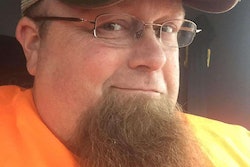