We have a couple of old dogs I’ve mentioned before. Buck and Gambit are our geriatric fur babies, and we love those boys like children. The older they get, the more ridiculous the care we give them, and we’d do it again in a heartbeat, because they’re good boys, and have been true boon companions to me when George is away, and to all of us when our family is together and at home.

Gambit is pretty deaf, and the deafer he gets, the more storms and thunder alarm him. I’m not sure if he’s confused because he can’t hear it and can still feel it, or if he has doggie dementia and just doesn’t know what’s going on, but he gets super freaked-out when it storms. This is a problem, because he tries to bolt around the house and crawl underneath things that are much smaller than him, and he has bad hips. Let’s just say that a thunderstorm usually ends with him heavily medicated and lifted up onto our bed, where he lolls and drools until his “thunder rolls” (which are what we call his medication-loaded treats) wear off.

In an effort to keep our dog from developing a drug problem, and possibly having to be Narcan’d back to life after a particularly bad storm, I’ve looked into alternative methods of combating his fears. (Side note: I can just see the local news headline: “TRUCKER’s dog needs nine shots of Narcan to be revived – film at !!!”)

I guess “thunder vests” aren’t a particularly new item — I just never had a reason to look for one, so I had no idea it was a thing. For those of you in the same situation, a thunder shirt, or vest, is a compression garment for animals (primarily dogs) that simulates a “gentle hug” and gives the animal a feeling of comfort. At least that’s what the people who are making a gabillion dollars a day on folks who put their dogs in tight t-shirts tell us. Who knows? The only way my dogs tell me if they like something is to either eat it and keep it down, or eat it and throw it up. Pretty devoid of any “feelings” when we communicate, so I’m not really sold on the $75 thunder vest, and George isn’t either.

Because I Googled “thunder vest,” I started getting all kinds of offers in my sidebar about thunder and vests and neurotic dogs. One in particular about a weighted blanket caught my attention. It’s advertised as a “thunder blanket for humans,” and it’s a blanket that weighs enough to “give you the sensation of being gently hugged” and promises to simulate a “loving squeeze” for people who feel anxious.

Now, I don’t know about you, but I have an aversion to being squeezed while I’m trying to overcome feelings of anxiousness. I absolutely cannot think of anything worse than having something heavy and dark thrown on top of me when I’m already feeling zippy-feet with my flight-or-fight instinct. May as well call it the “anaconda is trying to kill me” blanket. I don’t see the draw to this product at all, and sought George’s opinion.

“Hey babe, they have a thunder blanket for humans.”

“Do you get a participation award with your thunder blanket?”

And after I finished laughing so hard I choked, we decided the only thing our family would need a thunder blanket for is to trap the cat, should we ever decide to take him in the truck. Well, I decided that George will never let me have the cat in the truck, no matter what kind of thunder vest or blanket they come up with.

Sometimes, having neurotic pets is hard. 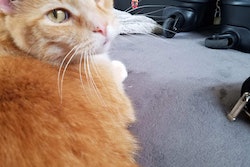 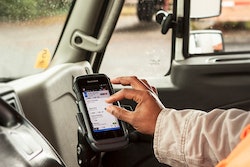 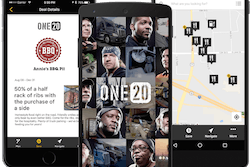