Editor’s Note: This story originally referenced a former version of the Denham Amendment. It has been updated to reflect the most recent version, brought by Nebraska Senator Deb Fischer.

Congress is again considering legislation that would block any state-level effort to dictate driver pay reforms and hours of service restrictions. The so-called Denham Amendment, first brought to the table by Rep. Jeff Denham (R-Calif.) in 2015, seeks to reassert federal authority over hours of service regulations and reinforce the industry’s standard per-mile driver pay model.

This is the third straight year Congress has considered the Denham Amendment. Attempts were made in 2015 to attach the language to the FAST Act highway bill, though those efforts failed. Last year, both chambers considered the Denham language as part of Federal Aviation Administration reauthorization packages. Those efforts failed too, as lawmakers were unsuccessful in passing an FAA bill. The Senate and the House this year are again using the FAA bill as a potential avenue to enact the Denham Amendment.

Court decisions in recent years prompted industry lobbyists, such as ATA, to press for the Denham Amendment’s passage in Congress. Proponents argue that the 1994 Federal Aviation Administration Authorization Act (aka FAAAA or F4A) prohibits states from enacting laws that interfere with “prices, routes or services” of motor carriers. State laws that require paid breaks for drivers violate that statute, proponents say.

Other court decisions calling for major payouts from carriers to drivers, such as the $60 million settlement reached between Walmart and its drivers this year, prompt the need for the Denham Amendment, says Joe Rajkovacz, head of regulatory affairs for the Western States Trucking Association. Such orders would spur a wave of lawsuits from drivers seeking similar payouts from their carriers, Rajkovacz says, even when those carriers are operating well within the law and within industry standards.

Opponents of the Denham Amendment, including the Owner-Operator Independent Drivers Association and the loosely organized Ask the Trucker group spearheaded by trucker Allen Smith, say the Denham language would slam the brakes on efforts to promote more fair driver compensation packages.

Major hurdles remain before the provisions can become law, however.

The Senate’s Committee on Commerce, Science and Transportation last week stamped approval on an aviation bill that includes the Denham Amendment. Fischer proposed the amendment, which was adopted by the committee via voice vote. The bill now moves to the full Senate for consideration, where the amendment could be subject to debate.

The House’s Transportation Committee also last month cleared an aviation reauthorization bill, though the bill is starkly different from the Senate version. The House bill does not include the Denham Amendment, but there could be efforts to attach it when the full House takes up the legislation. 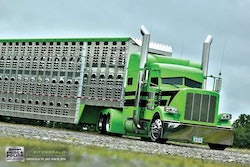