The carrier registration process for the 2018 fiscal year has been indefinitely delayed, according to a notice posted to the Unified Carrier Registration board’s website Friday.

The governing UCR Board of Directors has recommended that all states delay the enforcement period of 2018 registration compliance until 90 days after the Federal Motor Carrier Safety Administration publishes a final rule setting the 2018 registration period and an updated registration fee structure.

Registration is supposed to begin each year on Oct. 1, but a Federal Register notice issued by FMCSA last month announced that the annual registration period had been delayed until Nov. 1. The same notice announced that fees for the 2018 fiscal year would be reduced from 2017’s fee structure.

However, FMCSA’s failure to complete the formal rulemaking process regarding 2018 registration and fees has prompted a further delay in the registration period. “We regret this inconvenience and appreciate your patience,” reads the announcement from the UCR Board of Directors.

“Until further notice, please do not accept any carrier fees for the 2018 registration year,” the UCR Board told state administrators in an Oct. 27 letter. “If received prior to the final rulemaking, please return to the entity that paid the fee.”

A lawsuit filed in late September claimed the UCR Board of Directors violated federal open meetings acts by failing to notify the public of a Sept. 14 meeting, at which the UCR Board determined the 2018 fee structure and the delayed Nov. 1 registration start period.

A court agreed with the plaintiffs in the case and required the UCR Board to post to its website the minutes from the Sept. 14 meeting. However, the court said it lacked the authority to rescind the decisions made by the Board at the meeting. 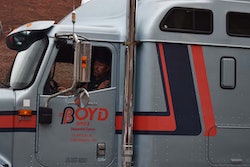