A new report from the American Road and Transportation Builders Association reveals that more than 54,000 bridges on U.S. interstates and highways are rated “structurally deficient.”

Of the 612,677 bridges in the U.S., 54,259 of them (or 8.8 percent) are considered “structurally deficient,” meaning these bridges may not be unsafe at the moment but are in need of attention and repair, ARTBA says.

Trucks, cars and buses cross these bridges 174 million times each day, according to ARTBA’s report.

In analyzing the U.S. Department of Transportation’s 2017 National Bridge Inventory database, ARTBA found that in the nearly 48,000 miles of the Interstate Highway System, an average of one bridge every 27 miles is considered “structurally deficient.”

According to ARTBA’s analysis, Iowa is home to the most “structurally deficient” bridges with 5,067 on the list. Other states near the top of the list are Pennsylvania (4,173 bridges), Oklahoma (3,234 bridges), Missouri (3,086 bridges), and Illinois (2,303 bridges). Based on the percentage of bridges in each state that appear on the list, Rhode Island leads the way with 23 percent of its bridges being considered “structurally deficient.”

Washington, D.C. has the fewest bridges on the list with eight, followed by Nevada with 31, Delaware with 39, Hawaii with 66 and Utah with 87.

A statement from the association says the pace of improving the nation’s inventory of structurally deficient bridges slowed this past year with the number of bridges on the list being down only two-tenths of a percent from the number reported in last year’s data.

Dr. Alison Premo Black, chief economist for the ARTBA, said at this pace, it would take 37 years to make all the needed repairs.

In his State of the Union speech last week, President Donald Trump called on Congress to pass legislation that would generate $1.5 trillion to spend on roads, bridges and other infrastructure projects. 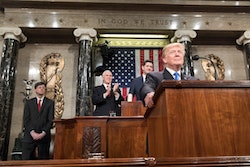 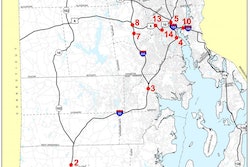