Speaking from the Bendix booth at the Mid-America Trucking Show in Louisville, Ky., ahead of one among Bendix’s annual series of tech talks, a company rep noted offhand that in addition to air disc brakes and automated or automatic transmission technology, crash-mitigation systems offered by Bendix were among the “hottest topics” as it relates to equipment under discussion by carriers and truck operators today.

Bendix’s Fred Andersky presented a driver primer on what to expect from driver-assistance systems, including crash-mitigation features like lane-keeping and active-braking technologies, as they develop. That includes what he called perhaps the biggest issue drivers have with such systems at present: false alerts, whether of the rumble-strip or audible variety.

The goal of a variety of alerting systems in collision mitigation systems is “not to inundate you with alerts,” Andersky says, referencing limitations of the company’s older VORAD system that, “every time you’d go under a bridge, would alert you. It was amazing how people found ways to disable that system” to combat the nuisance. “We’ve done a lot since those days to improve the algorithms to mitigate the false alerts you get.”

Bendix’s current technologies in use include Bendix Wingman Advanced and Wingman Fusion systems. Wingman Advanced utilizes radar only, often mounted in the front bumper’s center, to detect objects and vehicle speeds on the road ahead for alert-only purposes. Fusion, however, combines radar and a camera on the road ahead, the camera most often positioned in the windshield.

The radar-only system provides a warning, giving up to a three-second heads-up that “lets you know there’s something in the lane,” he says. You make the decision on how to react to brake or “steer to avoid the object.” It’s considered “collision mitigation” because it’s combined with full electronic stability control to prevent a roll-over if hard steering to avoid the impending collision is necessary.

The Fusion system, “because we have a camera that works with a radar system,” utilizes “more information in the system. Radar [detects] the object and the camera helps identify what it is. This allows us to apply braking power,” up to two-thirds of total braking power for the tractor brakes and the same for the trailer brakes.

“Because we get more info in the system we can scrub off more speed when you come up on a vehicle that’s going slower than you are,” too, Andersky says. A second-generation Fusion system, due out this year, will be capable of applying 100 percent of braking power “scrub as much as 50 mph.”

Such active braking control technology in the Fusion system is also utilized when adaptive cruise control is engaged to help maintain following distance, a customizable setting in many systems to help avoid some unnecessary alerts.

Following-distance alerts “let you know as the gap between you and a forward vehicle is closing,” Andersky says, above 37 miles per hour. Three consecutive alerts happen when the vehicle is “close, closer, then closest.”

With adaptive cruise control on, the Fusion system will “do three things – either cut the throttle for one second, use the engine brake, or if necessary we will apply the brakes,” Andersky adds. “You can override it by accelerating into another lane to pass.”

False alerts often happen because the radar system is looking for a metallic object, essentially, Andersky explained. “It’s good at finding those, but what it can’t do is figure out what the object is. The radar sends out a signal 500-600 feet in front” of the truck, which can become a false alert, for instance, running uphill as radar senses a metal highway sign on a bridge overpass ahead as you’re topping a rise. This is why, Andersky says, Bendix’s technology is programmed only to give you an alert for any object that is stationary, not the case on some other companies’ collision-mitigation technology, in which “braking occurs when it’s not needed.” 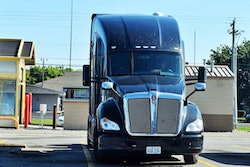 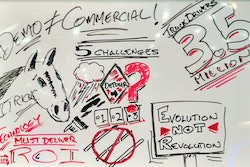