A bill nearing passage in the Colorado state legislature, SB 178, which has passed the Senate and awaits a House floor vote, would clarify workers compensation/occupational accident insurance coverage rules for owner-operator independent contractors.

Such rules at the state level require employers to provide workers’ compensation insurance coverage to help cover workplace accidents, required of most employers for their employees around the nation. With respect to independent contractors, the rules are sometimes written rather vaguely when it comes to whether individual occupational accident policies purchased by the contractors themselves suffice for the rules. In Colorado, for instance, the workers compensation rules were written to allow private insurance policies providing similar benefits, but past court cases have resulted in the situation Colorado-based owner-operator Rick Ash found himself in following a change in leasing motor carriers last year.

His prior carrier had accepted occ/acc in lieu of an individual workers compensation plan, and Ash paid about $1,400 annually for that coverage, which came in handy several times in recent years to cover foot and hand injuries the owner-operator incurred on the job.

When he leased to his current carrier, however, Ash learned that court precedents in Colorado were interpreted to have come down against alternative policies. Thus, allowing occ/acc for lessees was deemed to be too risky for the motor carrier’s comfort. Colorado was one of seven states in which domiciled owner-operators leased to the carrier were required to purchase workers compensation themselves. Ash currently pays around $67 weekly for the coverage, or well more than double the cost of his former occ/acc policy, which in his view was quite adequate.

Ash has testified to subcommittees in both Senate and House in the Colorado legislature, working with the Colorado Motor Carriers Association and the Owner-Operator Independent Drivers Association to advance legislation that specifically identifies occupational accident as an acceptable alternative for independent contractor owner-ops.

Will such a change make Ash’s leasing motor carrier accept an occ/acc policy there? “No,” Ash says, but “the hope is that when this passes, [state regulators will] have to come up with some specifications” for acceptable policies – “just what that similar coverage needs to have in place.” When regulators do that, it may give motor carriers enough on which to act to change their own policies toward owner-operators they lease in the state. 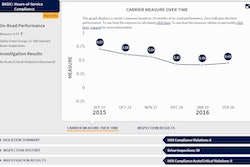