As of April 1, new violations associated with the Federal Motor Carrier Safety Administration’s electronic logging device mandate are now associated with the Hours of Service Compliance BASIC category in the CSA program’s Safety Measurement System, the agency noted. “These violations are not being applied retroactively; violations recorded prior to April 1, 2018 will not be counted in SMS,” though carriers having received a violation for not having an ELD on board and in use should pay close attention to the code utilized on the inspection report. If the violation was issued before April 1 with a code that is something other than 395.22(a), as Overdrive has reported, such situated carriers may have ground for a DataQs-system challenge to have the code changed to remove the violation (often encoded under 395.8 or 395.15 sections) from scoring in the system.

Motor carriers that have received ELD-related violations post-April 1 will “start to see them reflected in their HOS Compliance BASIC in early May 2018,” FMCSA says, “when the next monthly SMS results are released.”

With the most recent update, several new violations are available and severity weights associated with them in the internal safety-scoring program have been determined and newly published. Among them are new code variations on the 395.8(a) violation incurred for having no record of duty status/no logbook when required, all of which come with a 5 (out of 10) severity weight, two additional points added when an out of service order is associated.

**395.8A-ELD, having no logbook when an ELD is required
**395.8A-NON-ELD, the same violation but incurred when an ELD is not required (such as in the case of an ELD-exempt truck)
**395.8A1, incurred for not using the appropriate method to record hours of service

A complete list of the ELD violations and their severity weights, the majority of which are very low 1 weights, is available in the SMS Appendix A spreadsheet, which you can download via this link. The primary CSA SMS Methodology document, FMCSA says, will be updated following the May data update. 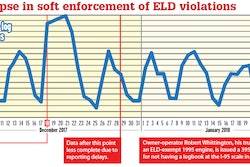