The Federal Motor Carrier Safety Administration has officially announced the postponement of a system that will streamline communication between state driver’s licensing agencies and FMCSA regarding drivers’ medical certifications.

In an interim final rule to be published in the Federal Register Thursday, June 21, FMCSA announced it is delaying the compliance date for several provisions of the Medical Examiner’s Certification Integration final rule from June 22, 2018, to June 22, 2021. FMCSA announced in May it planned to delay the rule.

The rule, part of which took effect in January 2015, requires FMCSA to electronically transmit to state licensing agencies the results of drivers’ medical certifications once they exams have been completed. FMCSA receives this information from medical examiners, who are required to upload to FMCSA exam results by midnight the day after the exam is completed. State agencies, once they receive results from FMCSA, will send the results to the Commercial Driver’s License Information System (CDLIS) to make other states aware of drivers’ exam results.

Despite the compliance delay for certain provisions in the rule, the requirement for medical examiners to report drivers’ physical exam results to FMCSA by midnight of the next calendar day following the exam still goes into effect Friday, June 22.

FMCSA says the information technology systems required for compliance with the rule are not in place as planned in the original rule, due in part to the ongoing outage of the National Registry of Certified Medical Examiners, so Thursday’s interim final rule formally delays the compliance date of the rule.

More on the delay can be found in earlier Overdrive reporting here. 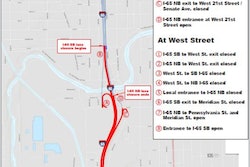 Portions of I-65 in Indianapolis to close next month