William E. Turney, a 38-year-old trucker from Martinsville, Indiana, was arrested after he drove 20 miles failing to stop for an Indiana State Police trooper.

ISP received a report of a reckless bobtail tractor heading south on I-65 on Sept. 21 that almost struck construction barrels. Several miles down the road, a trooper saw the truck weaving, driving off the right side of the road onto the rumble strips, then back across the highway to the left, all erratically, according to ISP.

The 2017 Freightliner continued driving, despite the trooper behind him with emergency lights and sirens on. Another trooper caught up and got in front of the truck with her lights and siren on and eventually threw out stop sticks, which Turney avoided.

A third trooper set up stop sticks up ahead, and the truck hit the sticks and eventually stopped about five miles later. Turney was arrested without incident.

Joann Wingate, a Pennsylvania chiropractor who pleaded guilty last year to wire fraud and false statement charges, was ordered Aug. 23 to pay $3,913.85 in restitution to 20 victims. She was already sentenced to two years of probation, which includes six months of electric-monitoring home detention and a $300 assessment fee.

The charges stem from Wingate falsifying FMCSA-regulated medical examiner certificates and drug testing chain-of-custody forms, forging documents using the identity of an unsuspecting doctor, falsifying other documents by claiming to be a medical review officer, and continuing to perform FMCSA-regulated medical exams for truck drivers in exchange for money after her chiropractic license was revoked in 2013.

Amanda Burgess, of Rochester, New York, was charged Sept. 5 with making false statements and conspiracy for her role in a reincarnated carrier fraud scheme.

During an onsite compliance review by an FMCSA inspector in May 2016 revealed the Dallas Logistics was not in Dallas, Texas, the location on its MCS-150 Motor Carrier Identification Report form, but in New York.

Burgess allegedly submitted a letter containing false statements in response to an FMCSA inquiry into the matter.

U.S. Customs and Border Patrol agents at the I-35 checkpoint near Laredo, Texas, found 62 illegal immigrants inside a reefer trailer on Aug. 29.

The driver of the truck, Barbara Jean Hutchison, was arrested and charged with attempt to transport and conspiring to transport undocumented immigrants.

All 62 immigrants in the trailer were found in good health.

On Tuesday, Sept. 18, a Netcong, New Jersey, police officer stopped a tractor-trailer for a violation and was given multiple fake names by the driver, resulting in probable cause for a search.

During a search of the trailer, officers found 10 kilograms of heroin and 10 kilograms of cocaine hidden in a shipment of onions. Officers also recovered $103,180 in cash believed to be proceeds from drug trafficking.

Two men were arrested: Vantwuan D. Williams of Victorville, California, and Earl Haggens of Los Angeles. Williams, the driver of the truck, was charged with two counts of first-degree possession of a controlled dangerous substance with intent to distribute, second-degree financial facilitation of criminal activity, two counts of third-degree possession of a controlled dangerous substance and disorderly persons hindering apprehension. Haggens was given the same charges except disorderly hindering. 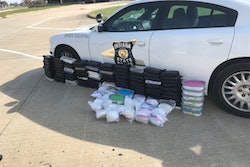