In a recent decision, a federal judge in Arkansas has said that drivers should be paid at least minimum wage for time spent off-duty and in their sleeper berths. The ruling doesn’t institute any new requirements for carriers, but it could open the door to lawsuits brought by drivers.

The decision also doesn’t stipulate that drivers should necessarily be paid directly for sleeper berth time, but according to this ruling, sleeper berth time is compensable under the Fair Labor Standards Act (FSLA), says trucking attorney Eddie Wayland of King & Ballow. The opinion by Judge Timothy L. Brooks, of the U.S. District Court in the Western District of Arkansas, says that, under the FSLA, drivers’ total compensation, once divided by the total number of hours worked, should equal at least the federal minimum wage of  $7.25 an hour. Having to account for sleeper berth time “is a big deal,” says Wayland, “because that’s a lot of time every day that would be considered compensable.”

Brooks issued the opinion on Oct. 19 in a case in which three drivers filed a class-action lawsuit against P.A.M. Transportation, the 59th largest carrier in the country, according to the CCJ Top 250. Brooks ruled that sleeper berth time is compensable under the federal Fair Labor Standards Act.

Wayland says this is one of the first decisions by a federal judge that finds sleeper berth time as compensable hours.

The decision doesn’t necessarily have an impact on other carriers’ operations, says Wayland, but it could open carriers up to similar litigation brought by drivers. And it is now currently the law in this case, Wayland says, though P.A.M. could continue to litigate and fight the judge’s ruling, “by asking for reconsideration or appealing,” Wayland says.

P.A.M. did not respond to multiple inquiries about the ruling or whether the company intends to fight the decision. The company could also choose to settle with the plaintiffs, which could number into the thousands.

The lawsuit was originally filed in December 2016 by P.A.M. drivers David Browne, Antonio Caldwell and Lucretia Hall, who allege that the company didn’t pay them minimum wage for all hours worked.

Brooks’ Oct. 19 decision wasn’t a verdict in the case, but rather in an opinion dismissing a motion by P.A.M. to have the lawsuit thrown out. His opinion involves varying rules from federal departments. While the U.S. DOT dictates drivers’ hours of service and duty periods, the U.S. Department of Labor abides by different definitions of on-duty vs. off-duty time, despite using the same phrasing.

“The DOT regulations aim to make our roads safe, while the DOL regulations aim to provide workers with adequate compensation,” writes Brooks. “If the DOT prohibits commercial truck drivers from driving more than 14 hours (sic) in a 24-hour period while the DOL requires their employers nevertheless to pay them for at least 16 hours in that same period, then this court sees nothing inconsistent or inharmonious about that state of affairs.” 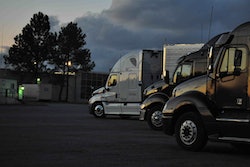 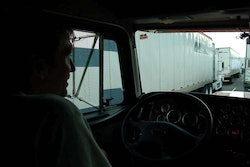 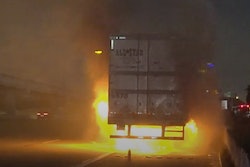 Hot peppers! Load of jalapeños goes up in flames on Houston highway