In a petition filed to the Federal Motor Carrier Safety Administration on Tuesday, May 19, OOIDA calls for a rulemaking that would require brokers to automatically provide an electronic copy of each transaction record within 48 hours of the contractual service being completed, and to prohibit brokers from including provisions in their contracts that requires carriers to waive their rights to access the transaction records as required by 49 CFR 371.3. The petition urged a clear-cut system of enforcement by way of “a structured fine system that would penalize non-compliance” with the regulation.

Queries to FMCSA about administrative enforcement mechanisms that may exist today went unanswered as of press time.

“Brokers have been deliberately skirting federal transparency regulations for decades,” said Todd Spencer, president and CEO of OOIDA.  “We certainly don’t think exempting yourself from federal regulations is legal, but this is precisely what is happening. It has to stop. We realize some brokers might not like the regulations, but that doesn’t give them the right to blatantly skirt them without any recourse.”

OOIDA earlier this month sent a letter to Congress requesting similar provisions be added to a COVID-19 relief bill. The provisions were not included in a bill passed May 15 by the House that is currently with the Senate.

The partnership includes a 50% off for owner-operator fleets of one to five trucks, and a 25% discount on TruckPark for company drivers and carriers with six or more trucks. TruckPark allows drivers to search for secure parking locations across the U.S.

Lytx gets waiver to mount driver-assist tech lower on windshields
Lytx has received a five-year waiver to allow its advanced driver assistance systems to be mounted lower on windshields than what is allowed in federal regulations. The Federal Motor Carrier Safety Administration says the lower mounting will have no adverse impacts on safety.

The company said that without the waiver, its customers would not be able to install the devices in a position that would maximize their effectiveness.

New TA Express opens in Texas
TravelCenters of America this week opened a new TA Express in Mt. Vernon, Texas, off of I-30 at Exit 147. The location is the former Duke’s Travel Plaza.

The company notes that it expects to open three new locations in June in Vermillion, South Dakota; Nacogdoches, Texas; and Lake City, Florida.

Eaton was traveling near Twinsburg, Ohio, during a bad ice storm in January 2019. He was in the right lane and noticed three vehicles quickly approaching him on his left. The first car, a Jeep Cherokee, got to the front of Eaton’s truck and lost traction and began swerving.

“I started lightly tapping my brake,” Eaton said. “I didn’t want to hit my brakes too hard and create a bigger incident. I had a semi behind me. Next thing I know, the Jeep swerved all the way to the median. It caught it and turned the Jeep sideways, projecting it right back in front of me. There was nothing I could do except brace for impact. My first thought was not to kill someone.”

The Jeep struck Eaton’s truck, bounced off and ended up in the median. It was nearly a quarter of a mile before he could safely get stopped. He started running back towards the Jeep, but a police officer stopped and took him back to his truck before he got to the car. The officer radioed back to the scene and learned the Jeep’s driver was not critically injured and there was no passenger in the car.

Eaton and his carrier received a note from the young woman driving the Jeep thanking him for his quick thinking and safe driving.

For his efforts during the incident, Eaton was presented with a certificate, patch, lapel pin and truck decals. Garner Trucking also received a certificate acknowledging their driver as a TCA Highway Angel. EpicVue sponsors the Highway Angel program.

Trucker Buddy announces 22 classroom grants
Trucker Buddy International and Trimble announced this week that 22 classes have each been granted $500 for school supplies and equipment needs as part of the School Supply Grant Program.

Schools are evaluated based on funding needs, as well as the level of creativity in how applicants would use the funds. The program is open to current Trucker Buddies and their classes.

“Trucker Buddy, with the funding from Trimble, is thrilled to offer these grants to these deserving schools,” said Alan Welborn, executive director of Trucker Buddy. “Many teachers and drivers donate not only their time but also their own funds to help their classrooms, so this is a great opportunity to help their community.” 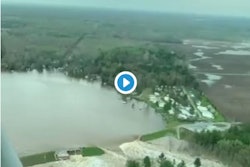