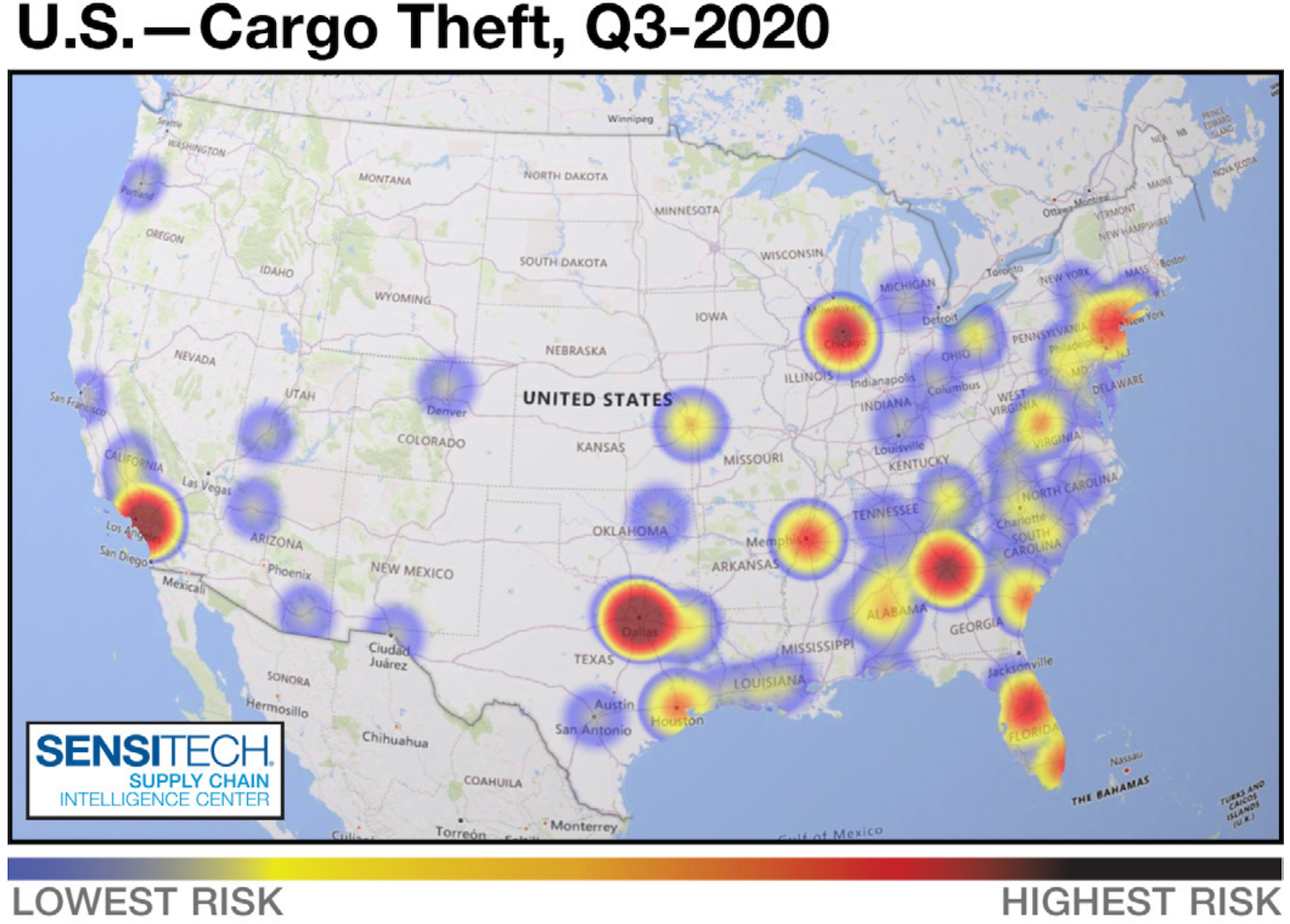 Cargo theft increased by 7% year-over-year in 2020’s third quarter. Texas and California were the states with the most recorded thefts. (SensiGuard image)

Recorded cargo theft up 7% year-over-year
According to the 2020 third-quarter cargo theft trend data released by cargo theft recording firm SensiGuard, cargo theft volumes increased by 7% when compared to the third quarter in 2019. The firm’s data is based on reports from law enforcement, insurance companies and more, and does not represent 100% of all theft activity.

During the third quarter, SensiGuard recorded a total of 194 thefts in the United States – 63 in July, 62 in August and 69 in September. The average loss value per incident during the quarter was $152,373. The loss value is within 1% of 2019’s third quarter, the firm adds.

Of note, despite the year-over-year decrease, the third-quarter numbers represent an 18% decrease in volume and a 28% decrease in value when compared to 2020’s second quarter.

The location marks makes for the 3PL’s third strategic fulfillment location for customers, said Ken Johnson, the company’s Chief Operating Officer for the warehousing group — allowing the company to reach most destinations within the U.S. within two days, around a fourth in a single day.

Love’s giving away prizes to truckers
Love’s Travel Stops is celebrating truck drivers and the holiday season with its first 12 Days of Christmas giveaway, in which customers can enter to win prizes daily on Love’s Facebook page beginning Friday, Nov. 27.

From Nov. 27 to Dec. 8, drivers can enter for a chance to win items like Bluetooth headsets, phone chargers, GPS navigators and Star Wars helmets. On Dec. 8, the grand prize of 100,000 (equivalent to $1,000) My Love Rewards points will be given away to one driver. Though prizes are geared toward professional drivers, anyone is eligible to win the items, except the grand prize of 100,000 My Love Rewards points.

Driver named Highway Angel for second time in career
Josh Elmore, a North Carolina-based truck driver for ABF Freight, has been named a Highway Angel by the Truckload Carriers Association for stopping to help a driver whose vehicle collided with a dump truck. Elmore was previously named a Highway Angel in 2015 after assisting a motorist whose car caught fire.

Earlier this summer, Elmore was traveling northbound on U.S. 220 near Madison, North Carolina, when he saw a big cloud of smoke or dust up ahead of him and realized that a dump truck and car had collided. The car was spinning around ahead of Elmore in the left lane, and the dump truck was in the right lane. 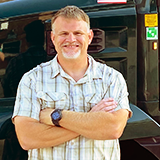 Elmore said the car hit the guardrail, and he started getting on his brakes to slow and stop and make sure cars behind him didn’t hit the car.

“My first reaction was to stop, protect the scene, and then go check on the driver. I threw my hazards on and came to a stop, blocking traffic in the left lane,” he said.

As he jumped out, a power company truck stopped traffic in the right lane. He could see that the dump truck went around the bend and pulled over.

When he ran over to check on the driver of the car, he said he was relieved to see the driver getting out on his own.

“I checked him for injuries and asked him several times if he was okay,” Elmore said. “He was able to walk around but was shaken up. He said he was on his way to Raleigh for a business meeting.”

He stayed on the scene for about an hour to try to help the people involved. 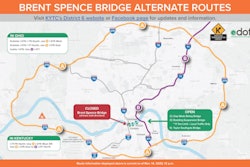