Per-mile rates on the spot market resumed their upward momentum in February after growth stalled slightly in January, according to rates data from Truckstop.com. The dips in January followed a roughly six-month streak of gains seen in the back half of 2020 as certain freight sectors were buoyed by shifts in consumer spending and a jumbled supply chain put continued upward pressure on spot rates. 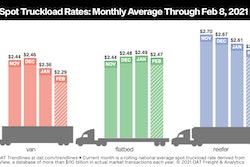