The Dishers dish out some unexpected fun and terror

You ever have one of those moments when you realize you’re in a totally weird place, and wonder what kind of life choices you made that brought you to that particular point in the mortal coil? And I’m talking about for real, not as a result of licking a frog, because if you’re weird enough to lick a frog, well, there’s your explanation for ending up in a weird place.

I had one of those moments this past Saturday, at the Guilty By Association truck show in Joplin, as I was being hauled into the cab of an extremely old and decrepit Pete by my husband, in front of a crowd of people, so he could rev the engine high enough to set the asphalt on fire without killing any of the crowd of people.

Before I describe the abject terror/exhilaration of one of the coolest rides my husband has ever taken me on, let’s back up and speak again about how we got there in the first place.

George had a photo shoot he was asked to do, and I was tweeting for Overdrive, so the Martins were nice enough to extend press courtesy to us, which means we kind of got to roam around and ignore cones and barriers and talk to the entertainment people. Believe me, the coolness of this isn’t lost on me, I’m still fan geeky about stuff like that, and we really do appreciate the time people take with us for pictures and interviews.

We had the pleasure of meeting Jim and Charnie Disher, the father/daughter duo from Colorado who spend playtime away from the trucking company doing Big Rig Burnouts. Charnie’s 15, she’s awesome, and I’m doing an article on her by herself, so you’ll have to wait, or this post will go on way longer than 600 words. (And, statistically, you’ll stop reading it anyway, I’m doing you a favor.)

Anyway, George asked Jim if he could do a ridealong, so he could film it with the GoPro, and Jim said, “Heck, why don’t ya’ just drive it.”

And I laughed, because I thought he was joking, and before I could get the second “ha” out, George said, “Hell yeah, man.”

To which I immediately answered, “What? No.”

Then Jim said, “I tell ya what, if you really want to drive it, be over here around 10:30, and you can drive the extra truck I have.” And at that point, a plague of locusts and the second coming of Christ couldn’t have stopped George from doing it, so I didn’t say anything. But wait, there’s more: Jim also said, “You can ride along and hold the GoPro,” and then I woke up and from my nightmare and thanked the good Lord it didn’t really happen.

Nope. That didn’t happen either. It also wasn’t one of my frequent filthy lies. We fast-forward to 10:30 and I’m questioning life choices as I’m being being hauled into the cab of an extremely old and decrepit Pete by my husband, in front of a crowd of people, so he could rev the engine high enough to set the asphalt on fire without killing any of the crowd of people.

You know how it goes from there, and there’s video (follow the link and see above), plus Tweets with pictures and this post is going to end up at exactly 600 words. So yay. And thanks again to Jim Disher for a lifetime memory, for sure. 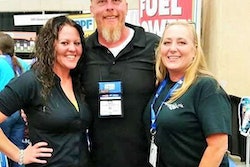 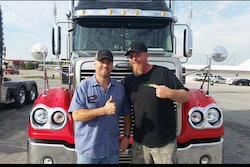 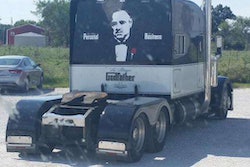 Guilty by Association, 2015: Photos and tweets from annual truck show taking place in Joplin this week 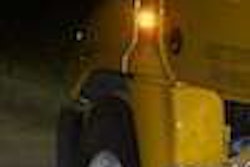