The truck-grinch that crashed Christmas 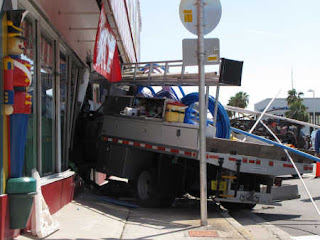 Shoppers at the back of a Christmas supply store in St. Pete Beach, Fla., may have wondered if Rudolph’s nose was off-track yesterday afternoon when they heard what must have been a one big noise. It could have sounded like a deer-guided sleigh and a jolly old elf gone wrong, but it was really a white county utility truck that crashed through the plate glass window, damaging a support beam of K. Kringle’s Christmas amp; Holiday Shoppe Monday afternoon.

The driver, Kenneth Houston, was examined and released with slight injuries and none of the shoppers inside the store were hurt, according to the St. Petersburg Times report by staff writer Luis Perez. St. Pete Beach police cited the driver for careless driving and released him. City Fire Marshal Ernie Hand is reported to have surveyed the building and “ordered it shored up by a contractor to prevent collapse.” Until the store is assessed as being safe, it will remain closed, the St. Petersburg Times reported Tuesday.
Houston crossed six lanes, including two turn lanes, according to store owner Mike Hartigan’s account in the newspaper’s Tuesday update. “We had a pretty good group of people in here,” Hartigan told reporter Emily Nipps. “I don’t know how he didn’t hit anyone.”

Is it possible the crash site, 75th Avenue and Blind Pass Road, could have forewarned the trucker? –Lucinda Coulter