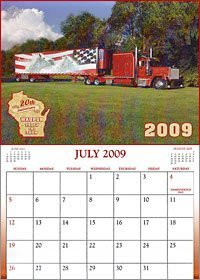 The Beaver Dam, Wisc., Daily Citizen newspaper reported on the successfully pulled off 20th installment of the Waupun Truck-N-Show in Waupun, Wisc., this weekend. Part of the draw of the annual event is the Ride of Pride convoy of trucks that hits the streets of the small town Saturday. This year, the parade included nearly 200 trucks from around the country. Keep an eye on the show’s site for details about next year’s event.

Among other 20th-anniversary productions was a 2009 big-rig calendar marking the event, also available at the show’s main site and pictured here — yes, that’s Wisconsin resident independent Jerry Kissinger’s 1991 Mack Superliner and reefer trailer, which I wrote about in an edition of Custom Rigs magazine earlier this year. The Waupun parade marshals likewise included the original five founding members of the committee that launched the show back in the late 1980s (pictured). From left to right, they are John Williamson, Alton Asmus, Steve Wendt, Ron VandeZande and Don Schultz, all of Waupun, Wisc. 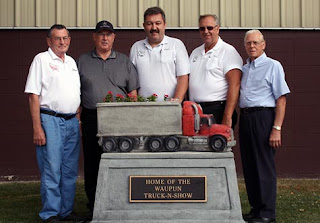