Owner-operators Tom and Debbie Berkel (pictured) had the only truck at the Great American Trucking Show festooned with hot pink roses and sugar-pink ribbons. The couple’s 1995 Kenworth W900L was a popular exhibit that ended up enlisting $825 in raffle ticket donations for the American Cancer Society’s breast cancer awareness campaign. 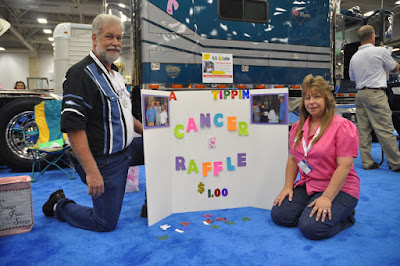 The Berkels, leased to Mercer Transportation as team drivers together for 28 years today, have been raising money for others in need for four years, with support from their fleet. This year the funds from an Oct. 25 raffle and silent auction will be combined to help breast and pancreatic cancer patients with few resources.

“It gets in your heart,” said 52-year-old Debbie Berkel of charity outreach. Residents of Swansea, Ill., both she and her husband, Tom, 60, plan to continue holding benefits alongside driving what is the lowest-numbered truck in the Mercer fleet.

One of the most poignant moments during the truck show in Dallas was when one of the exhibit hall guards, a handsome “sturdy-looking young man,” Debbie said, tapped the desk display and thanked her. “He couldn’t have been more than 30. He opened his cell phone and showed me pictures of his breast, blistered from radiation. Everyone thinks women are the only ones with breast cancer. That man just touched my heart.” 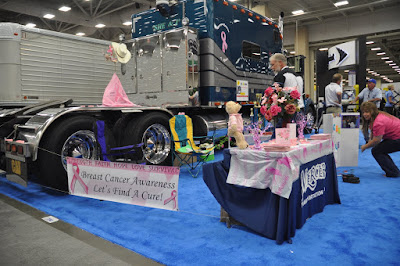 She says that the memory of her hometown pitching in to help after her father died in Middle River, Md., when Debbie Berkel was 15 still inspires her. She and her two siblings would have had to be separated had the church, fire department and other neighbors not helped them. When her mother died six years ago of cancer and, more recently, a Mercer colleague suffered the same fate, she told her husband, “This is it.” The rose emblazoned on the truck honors Debbie’s mother, Rosemary, Tom said.

Raffle winners will take home an ivory cowboy hat autographed by Aaron Tippin and one of his CDs, also signed by the country singer. –Lucinda Coulter
Top Stories