One truck cranks with football season 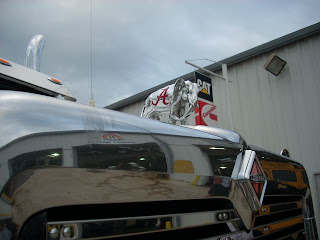 The equipment truck for the University of Alabama football team, a 2004 International 9900 decked out with Crimson Tide insignia, triggered almost as much hoopla as a season-opening kickoff when it pulled into a dealership in the veritable heart of the heart of Crimson Tide country (and the home of Overdrive offices), Tuscaloosa, Ala., for a needed part last Thursday afternoon.

Before Covan World-Wide Moving dedicated driver Jack Vickers had the 53-ft. Kentucky trailer loaded with pigskins and more at the athletic department less than 5 miles into town and headed to Atlanta’s Georgia Dome for the Saturday, Sept. 5, faceoff with Virginia Tech University, he came by the Southland International Dealership to have a part installed. Office manager Cindy Rozzelle, of Reform, Ala., said he made small talk with her as she snapped photos of the truck, pictured here. Southland’s parts salesman Danny Smith tipped her off.

“He came by and said, ‘You need to go see what’s outside,’” said Rozzelle, an 18-year veteran at the dealership. “It was so beautiful. It was just something to behold.”

Covan World-Wide Moving Co. CEO Jeff Coleman said that his company, based in Dothan, Ala., 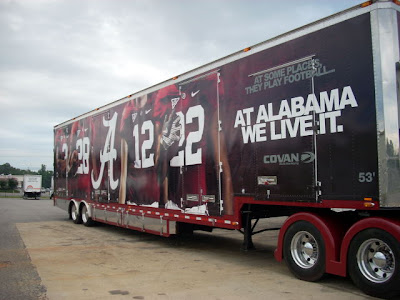 has used the tractor equipped with a 500-hp Caterpillar for five years to haul the world-famous team’s equipment to away games and bowl contests. He said the trailer’s skin is new this season.

“This one is very modern and futuristic looking,” Coleman said, noting that earlier versions featured more traditional scenes. “It’s been a work in progress.”

divAlthough legendary UA coach Paul “Bear” Bryant never liked the elephant mascot, it is emblazoned as the truck’s hood ornament and “its eyes glow with red lights when the parking lights are on,” Rozzelle noted. A devoted Crimson Tide fan and native Tuscaloosan, she said Friday she would be unable to attend UA’s opener (Tide rolled: 34-24), but her heart will be with football. “My husband, Hal Rozzelle, is a referee, so we’ll be at the UNA game. –Lucinda Coulter
Top Stories