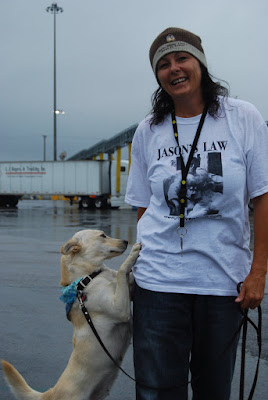 The subject of my “Exit Only” column in this month’s Truckers News was one among many lights of a new cadre of social-media-savvy advocates in the trucking community. Desiree Wood (pictured) is her name, and though she sometimes (somewhat — but only somewhat — facetiously) calls herself a renegade, she’s got her own and other drivers’ interests in mind when she communicates with Washington politicos, journalists and others via her highly trafficked “TruckerDesiree” Twitter feed; drops pamphlets about “Jason’s Law” truck-parking legislation in empty racks at truckstops amid recruiting magazines; speaks on behalf of truckers to the general public about T. Boone Pickens’ plan for America’s energy independence or for other female drivers often at odds with the male-dominated industry that is trucking. As I wrote in the column, which you can read here,”She contains the various threads…in the very fabric of her life, on the road, among the crowd, building empathy by delivering perspective from the inside out…” div

And even better, she’s pretty fun to spend an hour or so talking to, as I found out when I met her and her dog, Karma (who has her own Twitter feed), at a Nashville-area truckstop to talk life on the road, politics, net activism, the upcoming highway reauthorization, and more. Enjoy the video results that follows. Direct link is here.
Related Stories