Do you have Zonkatude? New novel by trucker chronicles band’s 40-year career 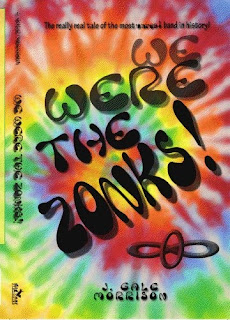 Jim Funkhouser, aka J. Gale Morrison, has been a truck driver “for 22 years,” he says. “I am thinking about making a career out of it!”

All the same, via the website thezonks.com, he’s begun to market his first novel, We Were the Zonks, about the career of a lately reunited band, first active in the 1960s. Described as the “’60s come back to life,” the Zonks might be the only fictitious band to have a full line of apparel, including kids’ onesies and t-shirts (some asking, Do you have Zonkatude?) to go along with their music — think the Who crossed with the Kinks with a touch of vintage ’70s Led Zeppelin, maybe. As one commenter at Funkhouser’s site laments the late state of music in our time, “Where are the epic musical rock operas that transcend? Is there anyone even attempting to write a ‘Stairway to Heaven’-caliber song? I can’t remember the last time I went to a concert expecting to hear God… Grok? I want to hear stuff that makes me think that there is a heaven…”

The “novel is now in production,” says Funkhouser, “and will soon been available on Amazon and via the website.” He’s taking preorders there ($16.95, via Paypal), and all preordered copies will come signed by the author.