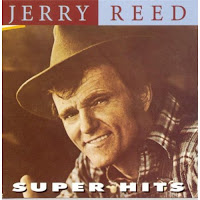 It’s a sad day. From the wires…: The Snowman has passed.

NASHVILLE, Tenn. – Jerry Reed, a singer who appeared in the ‘Smokey and the Bandit’ movies, has died of complications from emphysema at age 71, his longtime booking agent said Tuesday.

Carrie Moore-Reed, who is no relation to the star, said Reed died early Monday morning. Reed was a gifted guitarist who later became a songwriter, singer and actor.

In the mid-1970s, he began acting in movies such as ‘Smokey and the Bandit’ with Burt Reynolds, ‘Gator,’ ‘Hot Stuff’ and ‘High-Ballin’.'”