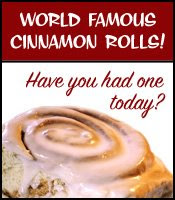 It’s not often a truckstop is singled out for exceptional cuisine. Overdrive Managing Editor Lucinda Coulter alerts us to the spot about Johnson’s Corner in Loveland, Colo., on American Public Media’s Splendid Table program. Program contributor Jane Stern, in a quest for the best cinnamon roll in the country, called Johnson’s Corner’s the “>biggest, largest, and possibly the best” (pictured). Don’t try to eat it by yourself, though, Michael Stern said on the program. It’s apparently “nine by nine by three inches tall” — mammoth, indeed. Also singled out for praised were Johnson’s Corner’s peppery chicken fried steak, its chili bowl, and the freshly baked pies. Happy eating.