No use crying over this 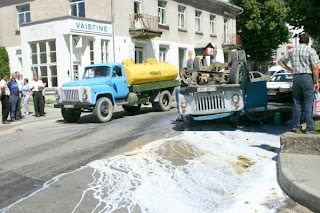 What began as a contest between brother and sister to find “the strangest items to be spilled on the road” has now taken on a life of its own, says Dave Ference, operator of truckspills.com. Alligators, bees, lots of beer and milk (pictured) are among the more interesting. The most recent calamity involved a truck that overturned in August between Parshall and Makoti, N.D., on the way to a launching station while carrying a Minuteman III intercontinental ballistic missile rocket booster.

After getting several comments from truck drivers worried about the health of the haulers after the crashes mentioned on the site, Ference instituted a policy of not posting any spill in which a death occurred. “I try to determine the condition of the driver before posting any spill,” he says. The Bethlehem, Pa., resident also maintains davescooltoys.com, where he sells his handmade plush dolls and other toys to adults and kids alike. Be sure to check out the October edition of Channel 19 in Overdrive, where this item first appeared.
Top Stories