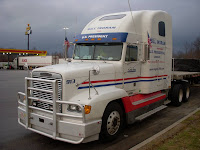 Owner-operator Bill Ingram, leased to Meyer Bros. in Elk Mound, Wis., earlier this year transformed his 2001 Freightliner FLD (pictured) into a sort of campaign bus as part of his efforts to win the presidency of the United States. As with most such small independent runs, there was a YouTube video to go along with it. In the waning weeks of his campaign, after a smattering of stories in various publications around the country, including in Overdrive sister magazine Truckers News, Ingram turned his attention to more achievable goals, waging an upstart and ultimately unsuccessful write-in campaign for a vacant Wisconsin District 91 State Assembly seat.

“>I’m not sure how much actual support I got,” Ingram says. “The local media is only reporting the ballot totals for the candidates that were on the ballot.” Neither is he sure of how many write-in presidential votes he might have gotten. As he campaigned around the country in the Freightliner, his pledged support was coming from truck drivers he spoke to out on the road over the course of the year, where he began gathering signatures for the balloting process early on, before learning of the byzantine rules out there, all varying by state, for balloting.

“>The one [rule] that finally brought me to a stop was that in many states, just to be eligible as a write-in,” he says, “I needed to fill out a Declaration of Candidacy form; however, it needed to be notarized by a notary in that state. It was just too much to travel to each state to find a notary, many in a very narrow time frame.”

All the same, Ingram ran on the issues, including some trucking-specific issues, and his campaign’s website lays out his stances in good detail. Check it out if you’ve got the time — Ingram says he’s contemplating another run soon. “>My future plan is to go with the momentum and support that I do have and run for Governor of Wisconsin,” he says. “I would like to concentrate my trucking to Wisconsin. If I bought all my support from all across the country to Wisconsin, I would have something now, but currently I am spread way too thin.”