Got the shutter bug? 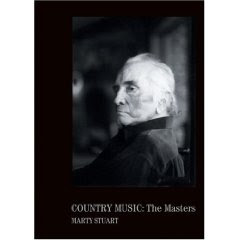 Country Music: The Masters is a new book of behind-the-scenes portraits of country stars from musician and self-proclaimed shutterbug Marty Stuart — and if you missed him on National Public Radio’s All Things Considered program yesterday, click back on that link and enjoy. The cover of the book, pictured, is a candid shot of the Man in Black taken on September 8, 2003, four days before he passed away.

On the radio program, Stuart, who was the featured artist at the Great American Trucking Show’s Friday concert in August this year, talked about his mother’s influence on his photography, likewise the jazz artist Milt Hinton. When Stuart was 13, as he tells it, he was touring with bluegrass great Lester Flatts and, on a stop in New York City, came across the photographic work of the jazz bassist Hinton, who chronicled behind-the-scenes moments on tour, in the studio and elsewhere. Stuart, from that moment forward, would do the same.

Sound familiar? Truck drivers documenting their own touring lives have been contributing for more than a year to Overdrive sister magazine Truckers News’ group pool on the Flickr.com photo-sharing site. If you’re a shutterbug, get over there and join, or just give it a look some time. Owner-operator Mike Petry is the moderator.