Bless the Virgin, bless the truck 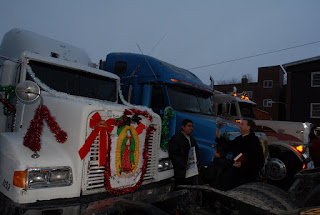 Chicago owner-operator Freddy Lagunes, pictured, dressed up his white 1994 Freightliner to give a frigid yet festive commemoration parade with close to 80 of his fellow Hispanic truckers to the day of “>La Virgen de Guadalupe” this Sunday in the windy city. The celebration, whose central day is Dec. 12, originated in Mexico when — according to tradition — in 1531 the Virgin Mary appeared to converted-Catholic native Juan Diego. div

Lagunes claims that most of the participants in the Dec. 7 event were recruited by him in his daily runs to Detroit and back through his CB Radio. This is the second year on a row for him and his wife Nancy, whom he concedes did most of the organization work — applying for police and city permits and obtaining the support of the priests of St. Blase Church in near-suburban Summit, Ill., one of whom (also pictured) blessed Lagunes’ Freightliner at the church at the end of the parade route.
Four to five inches of snow had fallen on Chicago the day before the parade, and truckers and their families braves punishing wind gusts and 20-degree weather to participate. The route ran from an industrial area down Pulaski on Chicago’s southwest side, turning west on Archer Avenue, then to 61st Street. Keep your ears open for next year’s plans. (Photo and reporting contributed by Jorge Arboleda.)
Top Stories