A tiger in Louisiana — and we’re not talking LSU football 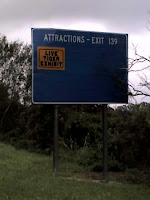 Louisiana scored a threepeat first in the Worst Roads category in Overdrive’s Highway Report Card survey this year, mostly for the reported awful condition of many sections of I-10 within the state’s borders, where recent battles of animal rights activists have hit the highway running. At exit 139 on I-10 sits the Tiger Truck Stop of Gross Tete, home for many years to a caged Bengal Tiger who is one in a line of predecessors advertised as roadside attractions at the stop. Michael Sandlin, president and owner, has been exhibiting tigers there in violation at least since 1993 of an unenforced Iberville Parish ordinance prohibiting the practice. Last year, animal rights activists waged a campaign to get the parish to enforce the law, and at a December public hearing partly viewable here (posted by the activists, the video edits out most of Mr. Sandlin’s testimony), truckstop employees and activists clashed over the otionally charged issue, the former claiming the tiger as a part of “>the family.” Next week Tuesday, Jan. 20, The Iberville Parish council meets again Jan. 20 and will take up the issue at 6 PM at 58050 Meriam Street, 2nd Floor, Plaquemine, LA 70764.

pVisit freetony.com, a site administered by a big cat rescue operation and sanctuary based in Tampa, Fla., for info on the activists’ campaign, and tigertruckstop.com for the truckstop, where you can sign a petition to Iberville county to allow the tiger to remain: at press time, there were 332 signatures.

pOne trucker, commenting on a YouTube video and identifying himself only as MIKEL0352, had this to say about the tiger. “>I’m a truck driver, and I’m through Gross Tete quite often. It is very sad how this tiger just paces back and forth on the concrete and sleeps on a concrete bench. Whatever the weather outside, the tiger just sits as a prisoner, like a circus sideshow, no toys to play with … they just throw a shovel of food in twice a day. I really feel bad for this animal. He breathes the exhaust of trucks that park just feet away from his cage, and idle at night to keep warm.”

pAnd the animal’s name is indeed “>Tony.” Not exactly original, I know, and coincidentally, you might remember this post about Louisiana’s superlative ratings in the Best Truck Stops category in the Highway Report Card. They were named the very best in the nation. Perhaps caged tigers have something to do with it?