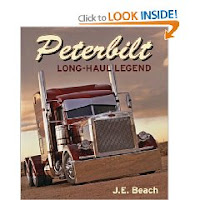 A new book by former Truckers News staffer and contributor James Beach chronicles the history of Peterbilt trucks, from the birth of the diesel engine to the recent end of production of the flagship Model 379. Featured on the hardcover’s front is the Outlaw Customs “Dead Man’s Hand” 2001 custom 379, which won best limited mileage truck at the Great American Trucking Show in 2007, and inside are a host of other beauty shots of show trucks and polished working trucks alongside the elegantly-told story. What began as Washington State logger T.A. Peterman’s WWII-era investment in the Fageol truck company quickly became, after his 1945 death and in the boom economy of the 1950s, an icon of the American highway and a symbol of aspiration for so many young truckers. The book’s a piece of eye candy you could well use on your shelf, if you can afford the $30 price tag. It’s available, though, for $19.80 via Amazon right now.