Though it’s unclear how exactly this is a safety-improvement motivator, Randy Cornell, safety VP with Joplin, Mo.-based Con-way Truckload, sky-dived from 10,000 feet after the fleet’s drivers met a safety challenge to get its “accident rate down by a creditable 34 percent in just five years,” as reported at HandyShippingGuide.com and elsewhere. “The figure equates to less than 8 accidents per million miles driven according to the company’s strict definition — any incident when a truck connects with people or property and causes so much as a scratch to either party.”

See below for an edited version of a 6-min. video shown at Joplin headquarters as the company recognized its drivers for the honor. The full video is here, at the end of which Cornell drops the following bomb: “I’ll never do another tasing, but I might just do this again.”

Extreme sports and mild shocks, it sounds like, are Cornell’s cup of tea.

“For 2008 [Cornell had] challenged drivers that if they met a new safety record,” says Con-way Truckload Maintenance VP Bruce Stockton, “he’d take a shot from a taser. And they did, so he did that at our January 2009 safety meeting.”

Stockton started the safety challenge trend in 1999 when he was in safety and told drivers “I’d shave my head if they shaved their accident frequency,” Stockton says. For craziest challenges, though, Stockton says Cornell wins the trophy. “I’ll give him the trophy. He can keep it. If he wants to do stuff like that, he can have it permanently.” 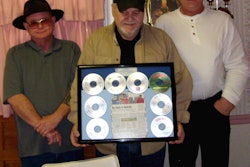