J marks the spot: Running with Jazzy in Nashville, Tenn.

Or, actually, Donelson and Hermitage, both part of Metro Nashville, and then into Mt. Juliet briefly on a trek that was a personal best for me in terms of uninterrupted, long-distance running. I achieved 4.6 miles over the course of the first 50 minutes Jasmine “Jazzy” Jordan ran Tuesday morning. The 17-year-old is on her way across the United States to benefit the St. Christopher Truckers Development & Relief Fund and highlight trucking industry health needs. She got up over 10 miles herself, her father, Lee Jordan, marking the stop spot with the J above. Before we got there, though, I would run another mile after chatting with Lee a bit while cooling my heels (and shins, ouch!) in the Ford F250 pilot truck he drives behind her on her runs (and that’s Fikes Truck Line leased owner-operator and avid cyclist Scott Grenerth on his bike in the shot at right). While Jazzy has logged an incredible 2,100-plus miles on foot since she began her trek in Los Angeles in the fall last year, Lee’s put 28,000 on the Ford’s odometer, running their travel trailer in 50-mile increments from base camp to base camp and Jazzy herself back and forth on her typically two-a-day 7- to 14-mile road runs.

Thought I’d share some of the pics from the day. Keep an eye on the blog (and Truckers News) in the coming weeks for more, including video.

UPDATE:
**Last week, I reported on Keys Truckers Jan and James McCarter and their “Thank You, Jazzy” tune penned for the young runner, which they debuted at MATS — Jazzy said it was just great, though the rock-star treatment she got every time she exited her trailer at the show got to be a little cumbersome at times. “The American trucker is really behind her,” says Lee, and they showed it with a plethora of hugs and kisses — and donations. One hauler wrote checks for $300 and $200, respectively to go to the St. Christopher’s fund and to the Jordans to recoup fuel and other on-road expenses, straight from his own new-truck savings. She came back from Louisville with a slight cold after all the close contact, but it didn’t stop her from running 7.5 miles Sunday, March 28, through Nashville with Truckers Tracks and “Thank You, Jazzy” producer Doug Jones, who is blind. They ran with a shoestring connecting them at the wrist. “I run 3 miles every other day,” Jones wrote to me the day before my own run, which is more or less what I do, “so if you can do that you can usually push yourself to double that distance.” I got close, but Jones bested me in the end. Go Doug!

The “Thank You, Jazzy” track is available for download on iTunes and via the Keys Truckers site. All proceeds from downloads go to benefit the St. Christopher Truckers Development & Relief Fund.

**And, in case you were wondering, the new-text-message ringtone on Lee Jordan’s cell phone is the quite catchy opening of Lady Gaga’s “Bad Romance,” added to his phone after the Run With Jazzy train happened to park next to Gaga’s tour bus at a Texas rest stop. Nearly 24 hours after my run with Jazzy yesterday, and time in the truck with Lee, the song is still running through the auto-play portion of my brain… 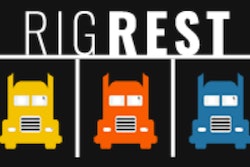 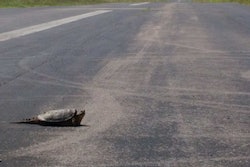 Results: My 5K with this week’s Truckin’ Runners event