When Doug Jones moved to Nashville, Tenn., from Delaware in the 1990s, he was a musician, but the guitar and harmonica player was in town at the invitation of longtime friend and former late-80s-era Allman Brothers keyboardist Johnny Neel, who had launched his Straight-Up Sound Studio on Nashville’s south side to do session and production work. “I was a musician,” says Jones, “but I didn’t know much about the business of music.”

You might remember from my post about the pair last year that both Neel and Jones share more than just considerable and wide-ranging talent in and devotion to music. They’re both also blind. Via the Tennessee Vocational Rehabilitation Center’s services for the blind, Jones enrolled in a music-business program at a local university and learned the ins and outs. The final result is the third edition of a series of compilation records that began with sound-track cuts to a few installments of the North American Show Trucks DVD series.

The first edition of “Truckers Tracks,” as the series is titled, was called Saddle Up and Ride. It cemented Jones’ commitment to making it an ongoing project, particularly after he felt what he calls the warmth of the trucking community he was a new part of when the record debuted at the Mid-America Trucking Show in Louisville in 2008. “When we went to MATS,” he says, “I met a lot of the distributors and product vendors, and everybody was very welcoming and warm. I knew this industry was going to be good for me.”

The third volume of “Truckers Tracks” is debuting this week in Louisville — this year’s edition, Ice Road Trucker, contains a title track whose lyrics were penned by Alex Debogorski, the ice-road-hauling star of the History Channel’s now-infamous TV series. The hard-driving rock ’n’ roll tune, its music written and performed in large part by Neel, is less than typical for a truck-driving-songs compilation, a quality Jones has striven to evoke from the series’ get-go, leaning toward a diversity of styles that runs the gamut between R&B, alternative rock and more traditional country licks.

“Trucking is a broad audience in terms of demographics,” Jones says, “so the music here is a little more progressive, with country and Americana right alongside newer styles — more progressive blues sort of stuff. in trying to stay true to the theme, most were specifically written for and about truckers.”

And, particularly on the latest edition, some have been written by truckers, too. The more involvement he’s had with various industry events and drivers, Jones has been able to identify and include dynamic material direct from driver/songwriters working in rigs on the road today.

They’ll debut the title track with performances by Neel and one of the contributors to the latest edition, Jan McCarter (pictured), whom I’ve written about recently in these halls, at Mid-America at the Rockwood Products booth on Thursday and Friday at approximately 4 p.m., Jones says. McCarter, one half of the Keys Truckers, will perform with Neel and others the “Thank You, Jazzy” track she and her J.B. Hunt-leased owner-operator husband, James, wrote in tribute to Jasmine “Jazzy” Jordan, currently past the 2,000-mile mark in her run across America to highlight truckers’ health-insurance and -care needs, donations benefiting the St. Christopher Truckers Development and Relief Fund.

When McCarter was asked by Lee Jordan to write a song for his daughter, McCarter and the Straight-Up Sound crew recorded and produced the song with a “We Are the World”-type choral treatment in just a few weeks’ time. I was there for the initial recording and had the pleasure of talking a bit with both McCarters. Check out the partial, early results below.

If you miss Jan at the Rockwood booth or outside at Jazzy Jordan’s trailer, tune into Sirius XM Channel 147 Sunday, March 28, in the morning for Tim Ridley’s show for selections from a record she’s been recording at Straight-Up Sound. Click here for particular Sirius XM scheduling info. 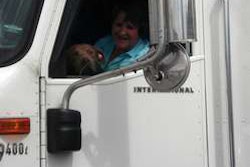