The State Senate in North Dakota late last week held a committee hearing on a proposal to further increase the max interstate speed limit in the state above its current 75-mph limit — to 80 mph, which would conform the state’s limits to those of its neighbors to the South and West. South Dakota, regular readers will recall, boosted top speed limits to 80 mph a couple years ago,  as did Montana. At that time, several readers echoed the thoughts of the Texas Trucking Association’s president, who’d asked “How fast is too fast?” as he suggested that 80, above the top speed rating for most commercial tires, might well be so. Considerations other than truckers’ highway speeds dominated his and other concerns, however.

“I think 70-75 is fast enough! We all notice the higher you post the speed limit the faster the crazies are out here. If you post the speed to 80, you’ll have people doing 90-100 mph.” —Derry Nelson, via Overdrive‘s Facebook page in 2015.

The quote and Nelson’s expressed concern about the ever-increasing distraction of the motoring public — increasingly deadly when combined with greater and greater speeds — from Nelson was echoed in a report from Fargo, N.D., by trucker Edward Tattnall, who weighed in on the side of the status quo in North Dakota: “75 is a good speed,” he told Valley News Live reporters.

In other speed news, commentary surged on what was likely the biggest piece of news last week, the supposition that Trump’s regs freeze could ultimately signal the death knell for NHTSA/FMCSA’s speed-limiter mandate proposal/nonproposal.

Part of the reasoning there is the regs order to reduce regulatory burdens to business — the two removed for every one adopted order.

Candance Marley offered what she saw as a “small correction” on the language used to describe that order. Rather than Trump having “ordered federal agencies to remove two existing regulations for each new regulation proposed,” she said, “he actually ordered [agencies] to consider two regulations to be removed.”

If we’re splitting hairs, the text of the executive order might go farther than consideration, I think: “Unless prohibited by law, whenever an executive department or agency publicly proposes for notice and comment or otherwise promulgates a new regulation, it shall identify at least two existing regulations to be repealed” [emphasis added]. The order then specifies some parameters for follow-on actions on implementing such repeals, particularly relative to the costs and benefits that could result, putting things in motion. So … while the order does stop short of explicitly directing the identified regs’ removal (identify at least two… is as close as it gets), by my reading its intent is at least clear.

As Joe Rajkovacz in the brief piece about the speed-limiter mandate in this context made clear, assuming the mandate would need another official proposed version (given the murky nature of the original proposal), NHTSA and FMCSA per the 2-for-1 order would also need to go on record about two regs to do away with. That, combined with widespread opposition to the mandate among truckers, could in fact make pursuit of the speed-limiter mandate not worth the effort, as reported. (We’ve got speed limits for a reason, after all …)

PTDI, others: A behind-the-wheel minimum is ‘critical’ for effective training rule 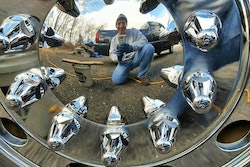