Daniel Mustafa, Assistant Manager of Technical Development for TravelCenters of America, says he still sees otherwise upstanding, wonderful people doing the kinds of things with their trucks that can turn a less-than-$1,000 major nuisance repair into a soul-crushing $11,000 one. When it comes to the aftertreatment systems on trucks with engines of 2007 and later emissions specs, price tags for poorly maintained units mount quickly given failure-related issues that happen down the line.

In the particular example he shared, a 2015 Kenworth came in after being driven through warning-light processes on the dash to the bitter end (the bottom icon in the image below). Repairing required not just baking/blowing the ash out of the particulate filter but replacing the diesel oxidation catalyst (DOC), just upstream of the particulate filter in the exhaust system, the DPF itself and a turbo, given excessive exhaust backpressure had damaged it. 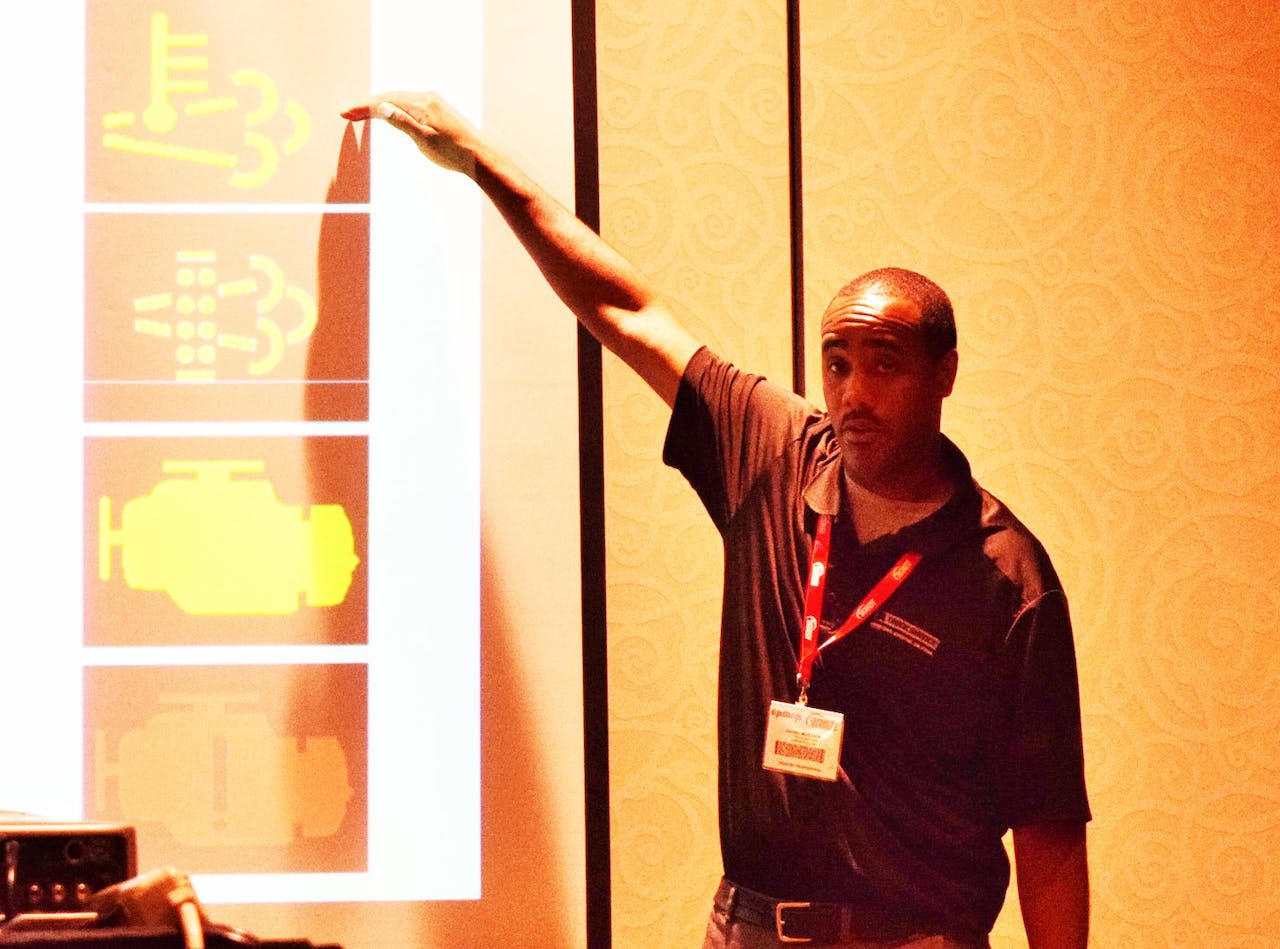 Mustafa’s DPF warning-light breakdown
**1. (at top) The high exhaust temperature light indicates that passive regeneration is occurring. This occurs when the engine is under at least 50 percent of load, often when hauling on the heavier side at highway speeds. Regeneration, generally, is the process by which increased exhaust gas temperatures turn soot clogging portions of the DPF into less-clogging ash.
**2. The “you need a regen light,” as Mustafa calls it. When it comes on, the system needs to be regenerated, whether actively or passively. It starts solid, asking you “please,” Mustafa adds, then begins to blink to signal greater urgency, and your engine begins to derate, or reduce power output.
**3. The check engine light (yellow) starts with a 20 percent derate (reduction in horsepower output), then moves up to 40 percent, which if you hadn’t noticed the 20 percent, you will most certainly notice, Mustafa says. “Once you get to this point, you’re in trouble and you can’t do a regeneration yourself — you’re going to need a service center.”
**4. The stop engine light (red) — [Ominously] “engine damage is probable,” Mustafa quotes the Cummins manual, he says.Mustafa was speaking at the Expedite Expo Friday, July 14. His “don’t drive through the lights” message I imagine is well-heeded by the owners in this audience, and any owner with a working knowledge of their equipment, of course, but other maintenance considerations might be less apparent given the occasionally persnickety and relatively new nature of these systems. Knowing when exactly the filter is clogged enough to warrant a bake and/or blow-out (or in the case of Detroit’s post-2010 units still under warranty, employment of that company’s own fluid cleaning method so as not to void the warranty, he notes) is where a somewhat-new maintenance approach is advised.

Unlike with traditional approaches to oil changes and other service intervals — with hardfast intervals depending on the application and piece of equipment — it’s pretty hard to get a miles-to-clean maintenance interval for a DPF out of a service rep. Why?

“The difference could be hundreds of miles to hundreds of thousands of miles,” depending on the application, Mustafa notes, with vocational/urban/stop-and-go applications having much shorter intervals than long and heavy. “It’s very hard to nail somebody down to give you a maintenance interval.”

He recommends working “in conjunction with a service facility to gauge where you’re at” on the need to clean, a matter of “gauging the level of [exhaust flow] restriction in the DPF.” At 130,00 miles, he suggests, flow test the filter. Do it again at next service interval, then if OK at the one after that. “Work on it with some of your peers,” those with similar miles per gallon, driving style and application. All play a part, including amount of idle, which Mustafa recommends against to extend the life of the DPF and broader system. Intervals will be shorter, too, if your foot is fairly leaden. “If you’ve got a heavy foot, you make more soot” that needs to be burned off in regen, creating more ash that will eventually clog the filter.

For drivers engaged primarily in long-haul, with plenty of on-road time at greater than 50 percent of load on the engine, it might go as high as 200,000 to 225,000 miles before any need to shop-test the filter, Mustafa says. Get the cleaning done before it break, he adds, “and you’ll never have an issue.”

Passive regen v. active regen
Passive regen “occurs naturally under between 50-60 percent [and above] engine load,” Mustafa says, when exhaust gas temps can rise to 570 degrees and above. Under active regeneration, triggered by a series of steps taken by the operator while the vehicle is stationary, the fuel doser ahead of the DOC in the system is engaged to bring temps up to 1,100-1,200 degrees to burn off soot. Lower-temperature passive regeneration, obviously, notes Mustafa, is “way better for the [long-term health of the] system than active regen,” also better for mpg given no fuel wasted in a parked process.

Whether to do a bake-and-air cleaning, or just air
To effectively blow the ash out of a DPF and clean it, the soot needs to have been turned into ash. If your truck can do an effective regen prior to ash cleaning, you will not need the baking process that many service technicians offer, Mustafa notes. “Thermal cleaning doesn’t remove anything, but makes it easier to do the pneumatic [air] cleaning. If your truck can successfully go through a regen, you only need the pneumatic cleaning.” If not, bake as well as blow. The baking/thermal cleaning process lasts for 6-8 hours.

Be on the lookout for bad DEF
If your engine is a 2010 or later emissions spec and you’re using diesel exhaust fluid (DEF) for the selective catalytic reduction (SCR) system to separate nitrogen and oxygen in NOx emissions, beware long periods of downtime (a month or more) in extreme weather and/or DEF stored for long periods without climate control. “Primarily,” Mustafa says, the “biggest fault I see as far as DEF fluid is parking the truck for a long period of time and coming back and operating it.” DEF is 32.5 percent automotive urea and 67.5 percent water. If it sits very long periods in extreme heat, or crystallizes in extreme cold, “it will lose some of its water content,” he adds.

Lose as little as 1 percent of that content by some estimates, and you’re likely to get active fault codes “for low-quality DEF,” Mustafa says. Eventually, your engine’s ECM will derate the engine by degrees, a function required by the EPA given a malfunctioning SCR system “does not effect engine durability or function of the engine,” he adds, to “make sure the operator adheres to the emissions rules. … If you run out of DEF it will derate you to five miles an hour.”

Various customers, Mustafa says, have made a drain and flush with warm water, followed by refill, of DEF tanks a part of preventive maintenance procedures at every service interval.

Engine maintenance “is a higher priority than ever”
To prevent problems downstream in the aftertreatment system and prevent those high repair price tags, perhaps the most important thing that can be done, as we’ve reported before, is to maintain fluid systems in the engine. What “occurs to compromise” a DPF can be “any engine oil, coolant” getting into the exhaust stream, Mustafa emphasizes. “A leaking injector allowing excessive fueling” to the doser ahead of the DOC”…  All will “make that filter fail very fast. Hot coolant turns into a rock,” totally plugging the filter.

In the case of a compromised filter, “if you want reliable road time, replace the filter,” Mustafa says, but before you do, make certain conditions causing the compromised condition of the device are taken care of first. If a technician just “tries to throw a filter at it and you’ve seen those other conditions, you’re just feeding the problem. Don’t let a servicing technician throw a filter at it. Find out why” the problem has occurred.

When the DPF needs to be cleaned, clean it — don’t jump to reman swap programs
If you do a swap with a reman cleaned DPF from another operation, you may be inheriting the issues created by the previous owner (see previous item). A reman filter is “only as good as how well the person prior to you serviced their vehicle,” Mustafa says. If you utilize a reman unit, “you’re inheriting their issues once you put that filter in. If you haven’t had issues, I implore you to get your own filter back.”

Any tips you can share on these issues? Drop comments below. 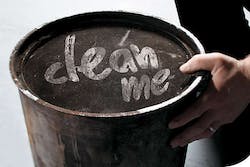 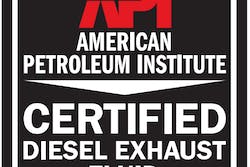 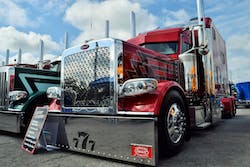 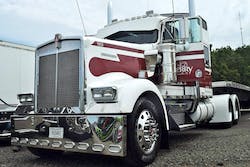