56-year-old, Arizona-based Dean DeSantis and his wife, Theresa, built their initial business decades ago now in part in the well-known “Witches Inn” 1985 Peterbilt 359 in which Theresa hauls to this day, leased to Long Haul Trucking. Dean, however, when they sold that initial, hazardous-waste-hauling business, went to work for the company that bought them out, spending upward of two decades with them.

I met Dean DeSantis on the site of the Guilty By Association Truck Show in Joplin, Mo., last month, and DeSantis remarked upon a verity of such an owner-operator-heavy show in the process of showing off the truck he’s put together most recently and plans to haul flatbed in himself come Spring 2018: “In the world of everybody building gliders, I’m a guy who kind of cuts across the grain a little bit,” he says. Having helped manage the hazardous-waste “corporate world” fleet he’s been working for over decades now, he’s seen what he says is marked improvement in reliability and more in engines, particularly those built in the last two years. 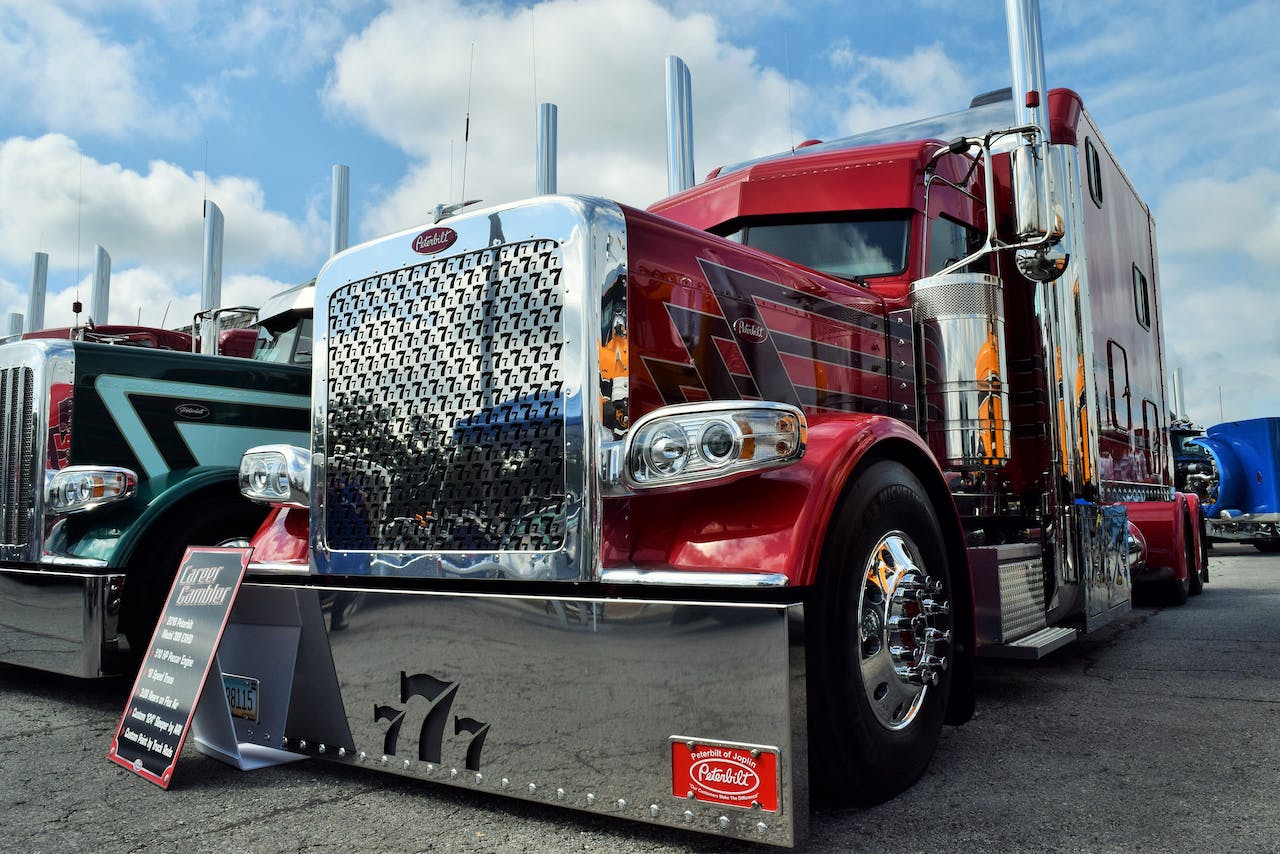 Dean DeSantis’ new project is a 2018 Peterbilt 389 outfitted with a 124-inch ARI sleeper and much more besides.

When he made the decision — a “career gamble” of a fashion, he says — to begin prepping to return to the road himself, he spec’d this 2018 Peterbilt 389 with the 510-hp Paccar engine, in a sense hoping to show the way for younger operators coming into the business toward new equipment. “2010-’12 I had my own trials and tribulations” with that era of equipment, he says in the video up top. 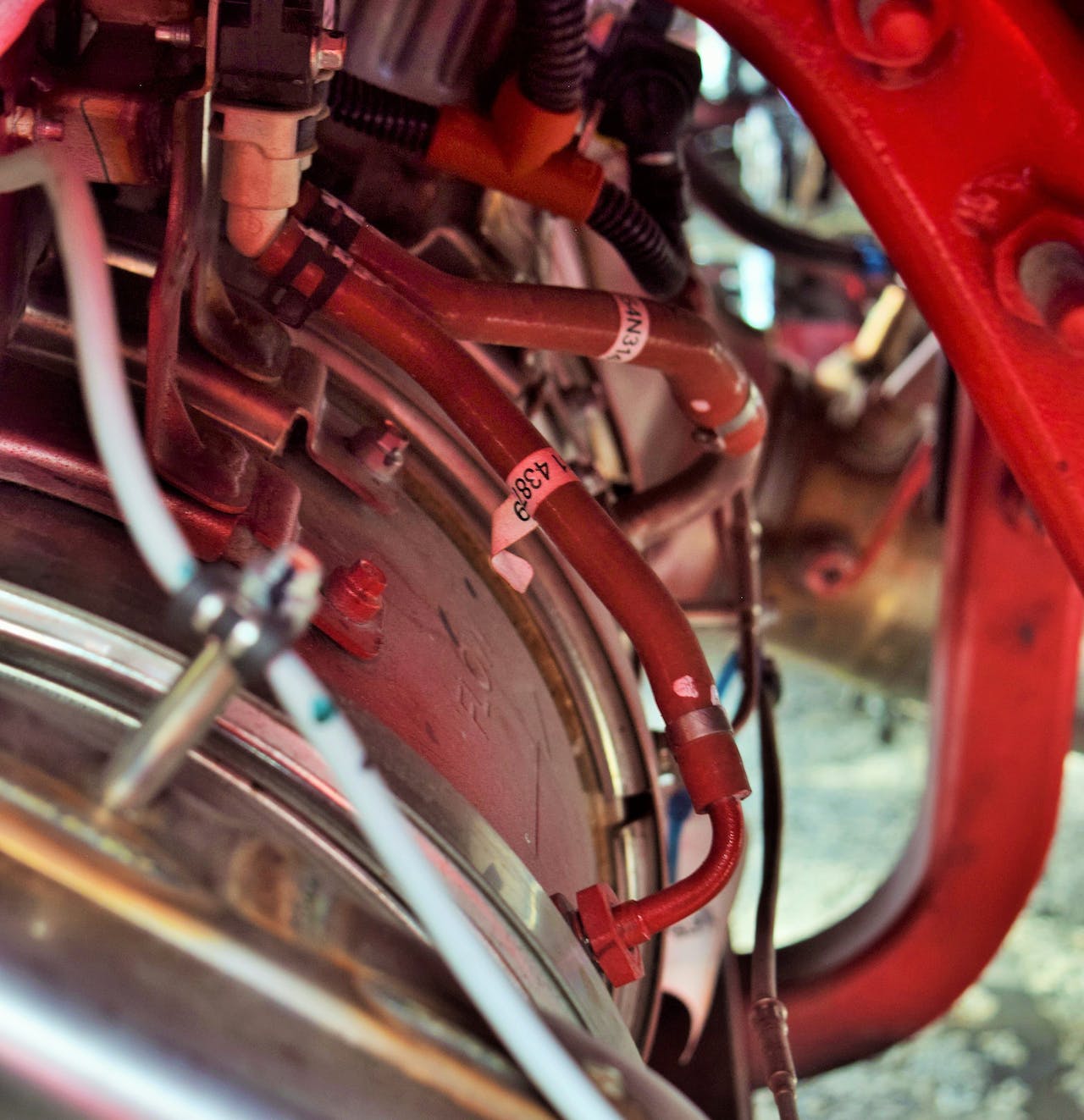 The single-canister housing design of the aftertreatment system in DeSantis’ Pete, under the passenger-side step.

But “with this updated engine, a 2018 model, with the one canister” design of the diesel particulate filter/selective catalytic reduction system, “I’m walking around here yesterday and everybody’s talking about deleting their DPFs and getting away from emissions, and I’m trying to do the opposite. I’m trying to show people that in today’s world, I think we’ve got to embrace it.”

Embracing it, in part, also means learning it and controlling it. “Trucks built in 2017 and ’18 now,” he says, “are really much, much improved.”

If you’re hauling in one of the newer models, have you found the same? If you’re reading on a smartphone, tap the image to call and weigh in with a message on our podcast line. If you’re on a desktop, call 530-408-6423. Make sure to tell us your name and state of residence.

Provided, he says, the “stupid stuff,” ancillary parts of the entire power system like sensors and wiring harnesses, don’t prove to be problematic longer-term.

In any case, take a run through some of the details of his power unit, which he took delivery of last fall in preparation for outfitting it with its 124-inch ARI sleeper later in Spring of 2018, after which Truck Rods at Peterbilt of Joplin laid on the paint scheme and other of the pieces.

A little more about the truck that’s not in the video follows in photo captions below. 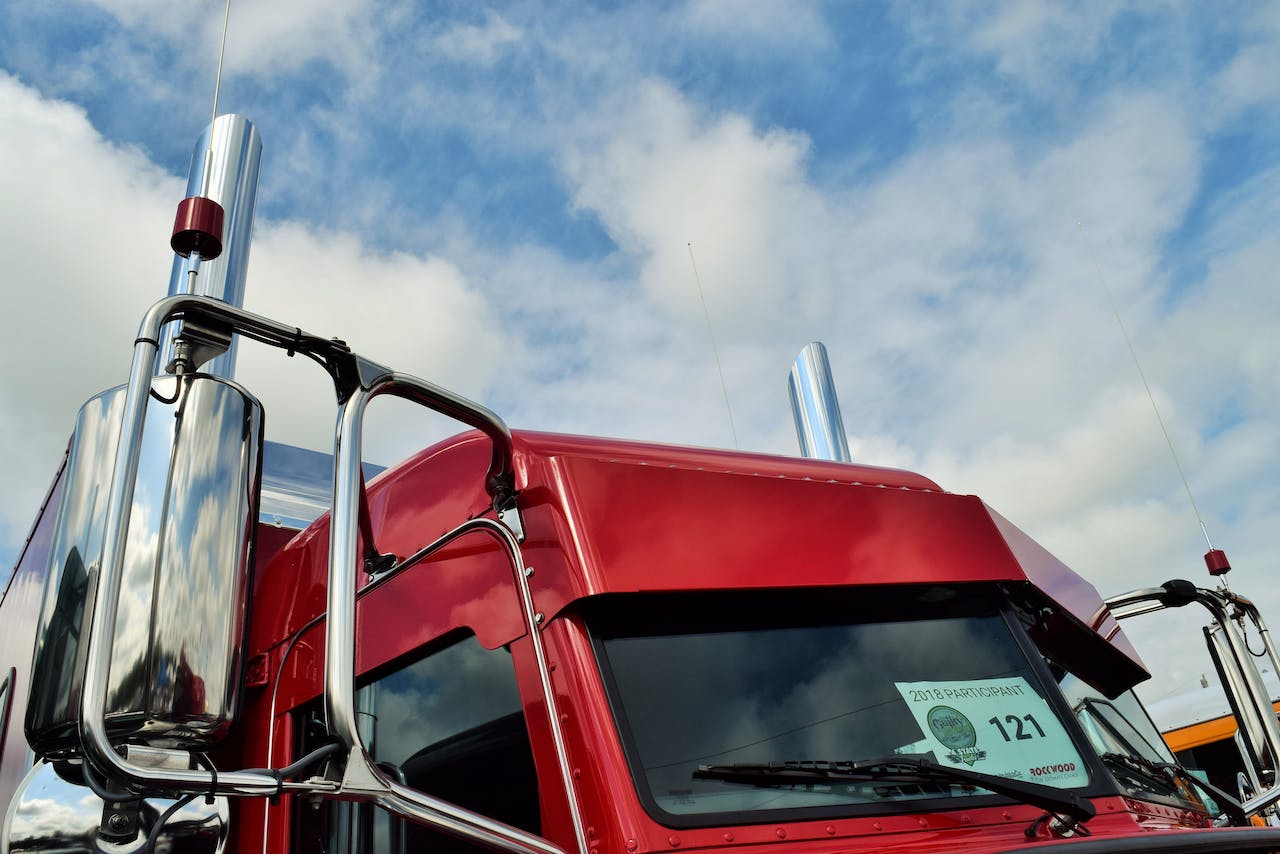 The visor on the 389 is by Roadworks and the straight pipes by Dynaflex. 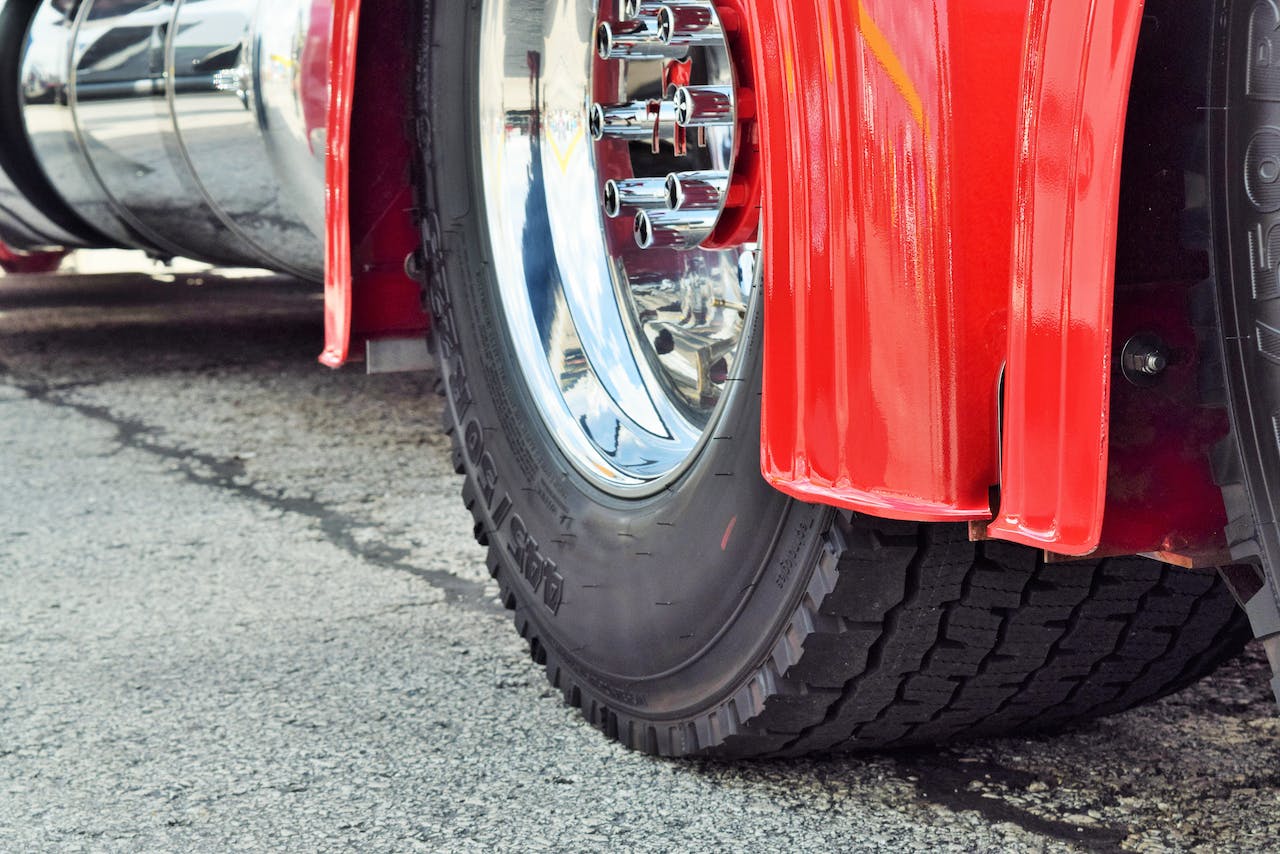 Partly in an effort to save weight, not only did DeSantis spec the unit with wide single tires on the tandems but he spec’d disc brakes all around. Before the addition of the 124-inch bunk, he adds, the rig weighed 17,600 pounds, 22,140 after. Fully outfitted, he thinks he’ll clock in around 23,000. He’s also ordered an aluminum flatbed from East Manufacturing for future hauling. 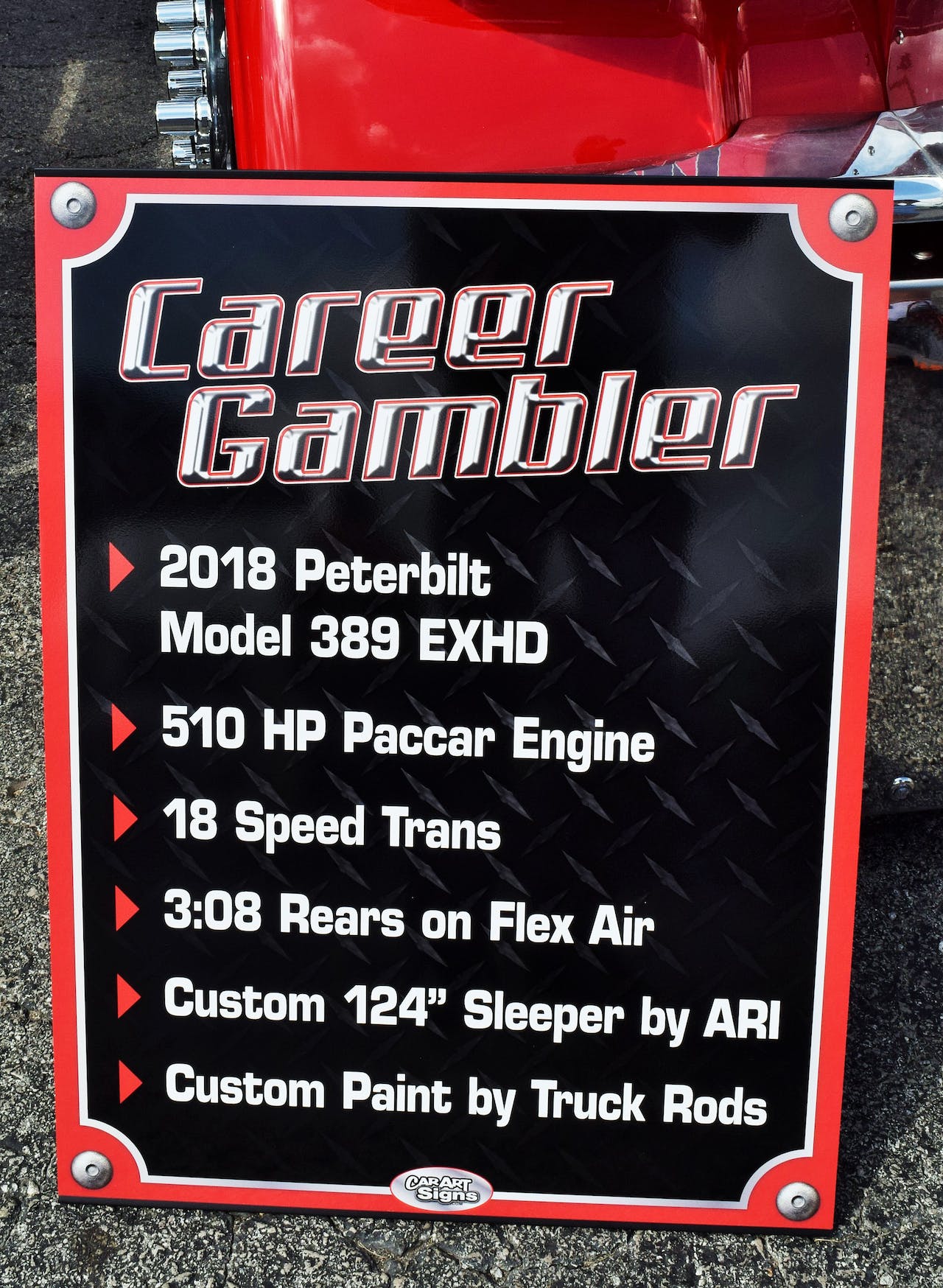 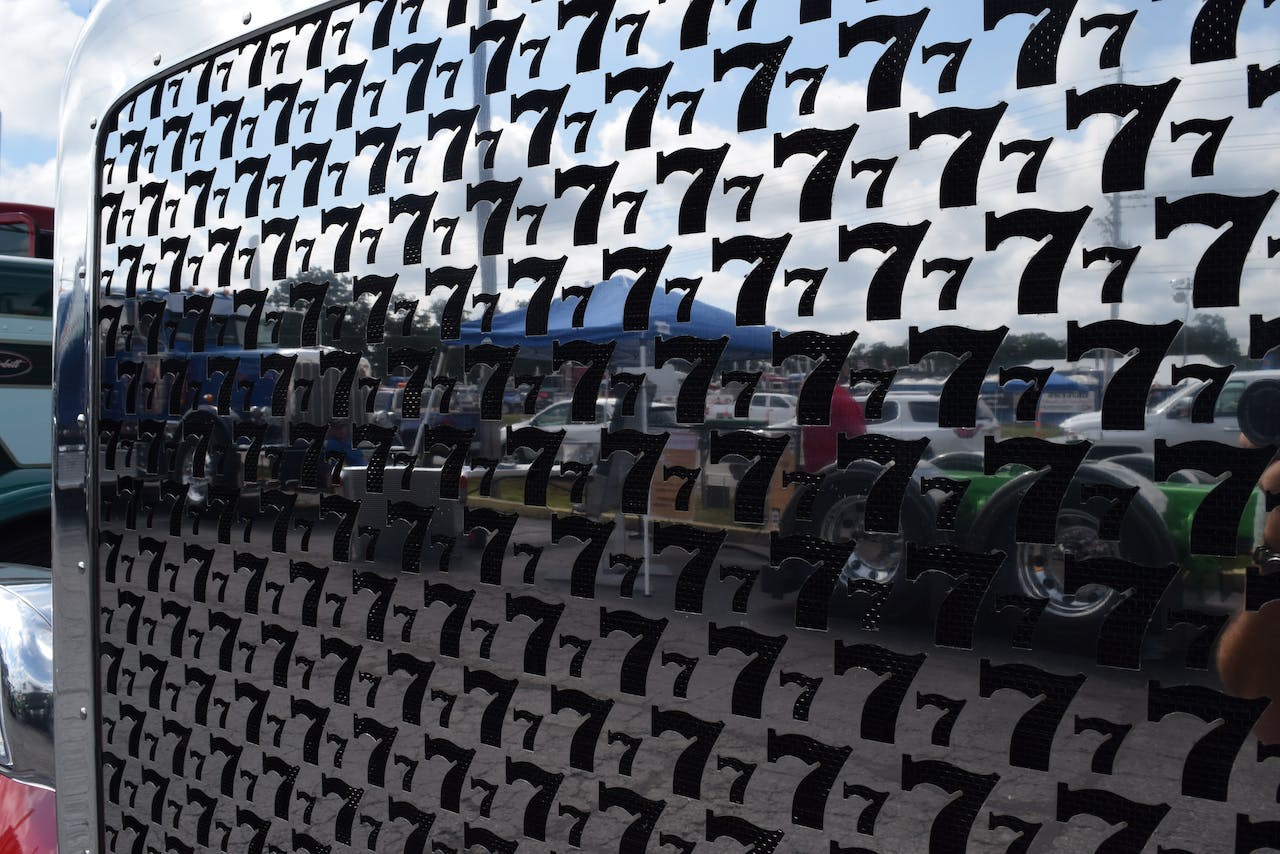 What’s with the 777 cutouts in the grille, front bumper and hub covers? In addition to resembling a slot machine pull and playing into DeSantis’ gambler theme, the numbers also happen to be the last, unique digits of the truck’s VIN.
Related Stories 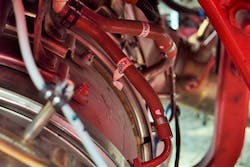 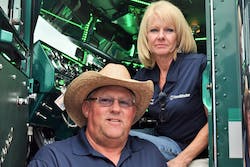 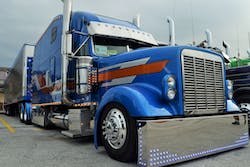 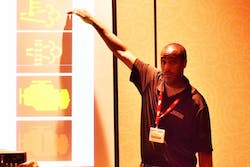