One week hence, at the Great American Trucking Show in Dallas, I’ll be moderating a discussion with two Texas Department of Public Safety truck-enforcement-unit officials. They’re Sergeant Dana Moore, who’s based in Austin headquarters doing a lot of work on electronic logging devices and training, and Dallas-area-based Lieutenant Monty Kea. Texas, regular readers and Texas intrastate haulers will recall, is one of just a couple of states (Florida is another) that has codified a delay in ELD enforcement for its intrastate market, so we’re sure to talk about what that means for in-state truckers and, perhaps, interstate haulers after December 17 this year.

I’ll also certainly be interested to hear Moore and Kea’s perspectives from the state level on FMCSA’s roll-out of the data-transfer system the agency at this point continues to develop. The latest, from FMCSA’s Joe DeLorenzo in another part of his talk yesterday here in Nashville, is that, well, it’s not done yet.

I wrote about that planned system in the July issue, the story available here. To date, the system is planned for fall testing in some states, Delorenzo said, and ready for prime time in December — if all goes according to plan, something of a wild card. How quickly states will take it up is another wild card. The long road for that the eRODS software and data-transfer system and the quickly approaching ELD deadline is part of the rationale behind the ELD mandate delay bill, which continues to gain cosponsors. H.R. 3282, the “ELD Extension Act of 2017,” now claims 38 House Rep cosponsors, though little other action has occurred since it was introduced on July 18 and promptly referred to the House Transportation and Infrastructure Committee.

We’ll likely talk about its chances, too.

I was hopeful, though, to structure part of the discussion around what questions you have for Moore and Kea about what the roadside reality might eventually look like or the state’s decision-making on its intrastate delay, planned reliance on email and display checks for logs at roadside, or other issues/special cases.

What are your questions? Drop them below or hit me with an email at tdills [at] randallreilly.com.

Meanwhile, protest efforts continue to mount
The “ELD or Me” Facebook group continued to plan an October 3-7 Washington, D.C., rally near the White House, with the Doswell Truck Stop, in Doswell, Va., at Kings Dominion Blvd. and I-95, as one gathering point. Complete details on where to meet for those traveling directly to Washington, D.C., rather than staging at the truck stop, hadn’t been ironed out. For those staging in Doswelll, the plan was to travel back and forth to D.C. to demonstrate daily.

Keep an eye on more at the group’s “Events” section on their Facebook page for updates.

A trucker not directly affiliated with the group was promoting a series of protest actions the same week, under the “Operation Black and Blue” name. It’s headed up by the “Truckers Had Enough” Facebook page and its founder, Mike “Gunney” Faram.

Based in Texas, Faram is encouraging those interested in participating in his efforts against the mandate not only to travel to Washington but to take a much-needed vacation and stage rallies in their localities in solidarity that early-October week. For those unwilling or unable to shut down but sympathetic to the anti-ELD efforts, Faram suggested logging hours to the letter of the law, including every moment of on-duty not-driving time, no matter the circumstances, strict adherence to off-duty/sleeper distinctions, and more.

In some ways bringing to mind what I believe was an OOIDA campaign of old in “run compliant,” if memory serves, “If enough people do this,” Faram speculated in a fairly recent video message to supporters on Facebook, truckers have the chance to illustrate to regulators underlying issues with the hours rule. You’ll find more on the Truckers Had Enough page. 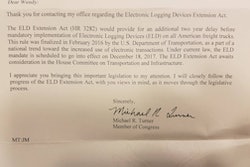 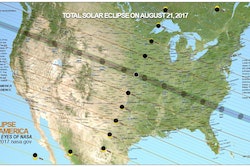 Extra amateur day on the roads for total eclipse, particularly in these areas