Owner-operator Glenn Keller regular readers may well recall from my talk last year with him about his book, Moving My Mountains. What I didn’t write about at the time, but which came up briefly in my conversation with Keller then, was an incident a little over a year ago at a lot where he commonly parked his truck while visiting a Gastonia, N.C., friend along one of his haul lanes up I-85 into North Carolina, at west end of the Charlotte metro area. 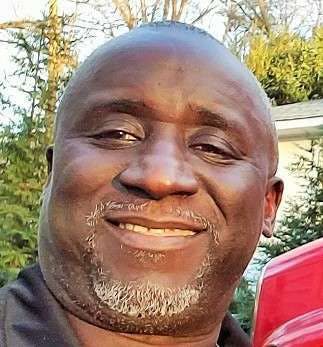 Read more about owner-operator Glenn Keller in this story about his Moving My Mountains book.

“I’ve been towed one other time and it cost me $1,000,” Keller says, but when his truck and trailer were removed from the property at 1545 Rankin Lake Rd. just off I-85 at Exit 17, by a company based in neighboring Charlotte, it cost him upward of $3,000 to get it back.

“I had been parking there for a while” on routine visits to the area, Keller said, noting he believed towing companies can be “so predatory they just find a spot they know where trucks park and throw up some signs.”

He’d never seen no-parking signs there before the tow happened, though when he left the area after the incident he “went back and took a picture. You couldn’t even see the sign” on approach to the lot from the intersection of I-85 and U.S. 321, he added, given where it’s placed, a small square sign on a larger realtor’s sign at the edge of the property. 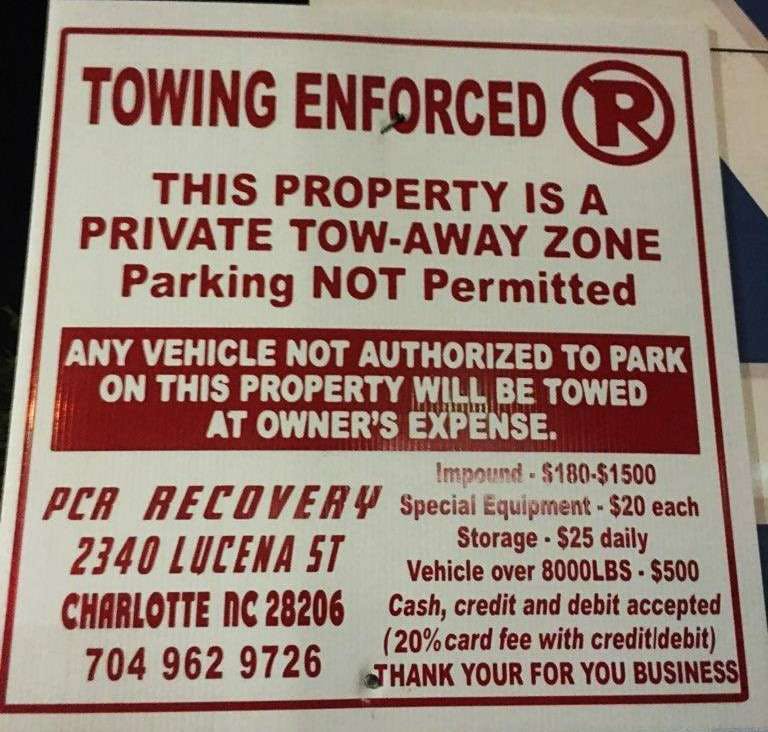 Further signs were placed on trees at the back of the lot, a spot truckers typically backed their trailers against, obscuring the view. At the time, Keller added, the spot was well-utilized by trucks, including some that were referred to the parking location when staying at local motels. 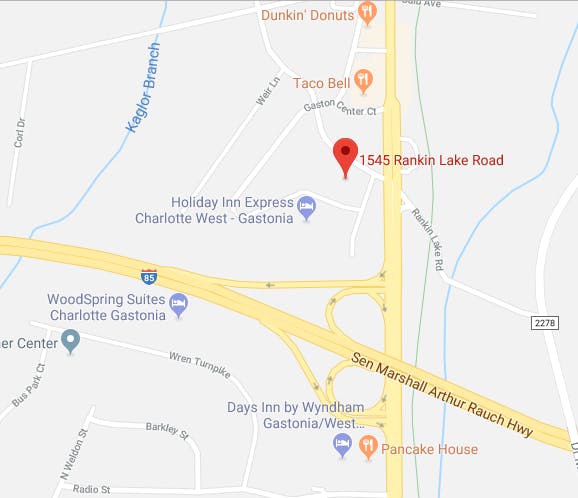 Map view of 1545 Rankin Lake Rd., which truckers would do well to avoid.

“The industry being what it is, we’ve got more drivers than we’ve got parking spaces” where they’re needed, Keller said then, an issue I’ve written about quite a lot in recent times and which has come even more to the fore with the advent of the electronic logging device mandate last December, stiffer enforcement going into effect on April 1 this year.

Keller was looking for a potential attorney to take his case against the towing company when we talked last year, and had been in touch with North Carolina’s attorney general’s office about the situation, all to no avail. (The AG’s office determined they didn’t have authority to prosecute, Keller says.)

Late last week, however, local authorities in Gastonia sent Michigan-based Eagle Express small fleet owner Leander Richmond a copy of a letter addressed to a different towing company, RPM Towing and Recovery, based in Gastonia. It stated signs placed on the property were in violation of local ordinances, specifically City of Gastonia code sections 8-378(a)(1) and 8-378(a)(2)(d). The letter went on:

The signs on the property are not within five feet of the street right of way line. Additionally, the signs at the property do not state the maximum fees and charges for booting or immobilizing a vehicle. … The maximum fee cannot be stated in a range from $100-$5,000, as this is insufficient notice to the public. Moreover, it is apparent that a “0” was added ad-hoc to the original $500 listed.

The letter directed RPM to “cease towing from the property until the requirements … are met.”

It also directs the company to refund Richmond the $1,600 charged to him to remove boots applied his driver’s truck while parked there the weekend of April 7. The driver had in this case been aware of the signs placed on the property warning drivers not to park there, but in need of a place to rest, went ahead and parked. Richmond’s “driver was in the truck when the truck was booted and he had a sign in the window that stated that if they woke him up he would move,” Richmond said in a letter to city officials asking for remedy of the situation. “I fully understand, as does the driver, that there are signs warning not to park there.”

What’s more, Richmond says RPM applied not just one, but two boots, immobilizing both truck and trailer, and “initially wanted $2,000 plus a 20 percent credit card fee to have both removed,” he says in his letter. “That would be $2,400 for being booted. I am enraged just typing this.”

The lot presents a convenient trap for towing businesses, given significant use by truckers needing rest along the I-85 or U.S. 321 routes through Gastonia, Richmond notes in the letter. The lot “serves absolutely zero purpose other than to lure trucks in so that they can be booted. … There is no business or building or place to conduct business present on this lot. If trucks are so offensive and they are truly worried about any possible damage done to the lot by trucks, they could simply gate it, or put a chain across each entrance to keep trucks and other vehicles from pulling onto the property. Instead, they have resorted to lying in wait for trucks to pull in and park, which they know [is] going to happen, and then they apply boots.”

Owner-operator Keller was towed farther afield from the location, but he did note at the time that this was going on at the lot even then, more than a year ago now. A driver he talked to there after the incident had been asleep “in his truck, with it running – they put a boot on it while he was sleeping,” he said. “The guy with the boot, they got $750” for it.

Have you been snared by such a tow or booting? If you’re reading on a smartphone, tap the image to call and paint the scene for us in a a message on our podcast line with your story. If you’re on a desktop, call 530-408-6423. Make sure to tell us your name and state of residence.

Richmond notes that Keller and others similarly situated, if they do in fact have pictures of sign placements at the time of their tow or boot from the lot, should work through the city of Gastonia to possibly get restitution.

Further ordinances limiting the value towing companies can extract from agreements with owners of private lots may not be in the offing in North Carolina locales, however, given a 2014 state supreme court ruling in the George’s Towing v. Chapel Hill suit, which struck down such maximum-fee provisions of an ordinance imposed by the Chapel Hill municipality.

Richmond noted that, though the state supreme court’s ruling against the town’s rate structure provisions in its ordinance presents a barrier to any local rate regulation by cities, Gastonia had nonetheless “been a huge help” on combating the situation at 1545 Rankin Lake Rd. 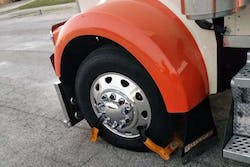 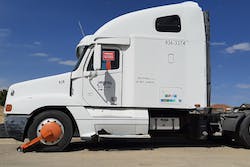 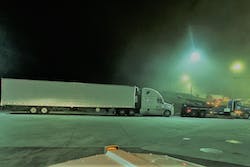