South Bend, Indiana-based RV toter Rudy Yakym Jr. hauls travel trailers out of his home state west, toting other vehicles back. Until July 11, he’d done that with a Dodge dually and a 53-ft. dovetail step.

In Goshen on that fateful day, however, just three miles from where he was headed to park the empty trailer after a West Coast run before heading home, he was plowed into from the rear on a busy four-lane by a Class 8 Volvo pulling a half-size container.

He had been stopped, pulled up “short of the main entrance to a Menard’s store so as to not to block the entrance, with a red light holding up cars about 200 feet ahead,” he says.

On impact, his rig was “launched 33 feet forward, completely without warning,” he says. The Volvo, traveling between 30 and 40 mph, Yakym estimates (the road was limited at 40), “came up onto the rear of my trailer, pushing it forward, ripping my fifth wheel hitch off of its frame rails and pushing the front of my trailer into the headache rack on my truck, driving it forward into the back of my cab.”

As for Yakym himself, the driver’s seat, which he was strapped into, broke upon impact, “laying me flat out.” Had he not been toting the trailer at the time, he’s “fully confident that I would not have survived.”

He was checked out by medics at the scene for a stiff neck, but thankfully was otherwise OK. Then, when a couple hours later he experienced a headache, “I went to the local ER where they took X-rays and a CT scan,” he says. “I have been seeing a chiropractor for massage therapy and neck adjustments twice a week.”

He talked the day after with the owner of the company the Volvo’s operator ran for, and expressed concern that the driver was distracted by his phone, probably texting at the time of the accident. “The company owner indicated that the driver had admitted that very thing to him,” Yakym says, and the driver “was terminated from his position.

“I shudder to think what would’ve happened had I not been there standing in harm’s way for the people in front of me. There was a long line of cars that this driver would have careened into, leaving, I am sure, numerous people dead.”

At once, he urges all to take to heart the danger of distraction and put the phone down when behind the wheel. “I have seen the results of what I believe were distracted driving accidents” other than his own, he says. In “one such accident a tractor-trailer plowed into the back of another tractor-trailer. I believe the one in front was sitting still in stopped traffic on the highway. He was hit with such impact that the back of the trailer … went up the front of the tractor in the rear and over the top of his cab and into the top of the trailer in back. There was at least 150 feet of fiberglass and plastic trailing behind the accident scene. There were no plastic or fiberglass parts left on the tractor in the rear. I do not believe it was a survivable crash.”

Yakym has dealt with headaches and muscle pain since his accident, but a bright spot has been that he will be back to hauling — hopefully by the end of this week — in a single-axle 2014 Freightliner and with a trailer similar to his previous one. He bought it from an owner-operator who was “getting out of the RV hauling business,” he says.

It all could have been worse, of course, he knows, and says he takes heart in Bible-verse Romans 8:28, “which says that ‘God works all things together for good to those who love him and are called according to his purpose.'” 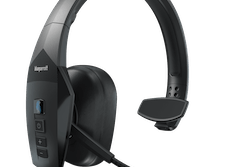 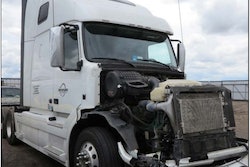 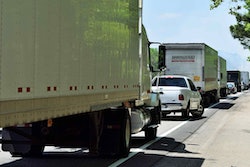 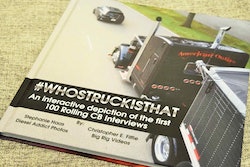