As so many of your comments are clear evidence of, our recent reporting on investigators’ efforts to tackle what they say is a pattern of violation of cabotage/foreign-employment rules centered around hauls out of Nogales, Ariz., didn’t go unnoticed.  In this context, cabotage refers to restrictions on any domestic freight movements by carriers based abroad, generally. In the United States, Mexican and Canadian carriers as a general rule are limited to cross-border movements that have origins and destinations in separate countries. A Mexican carrier with cross-border trucking authority, for instance, is not allowed to compete on lanes point-to-point in the United States, and the same applies to cross-border Canadian carriers with some limited exceptions.

An expert on the subject of cabotage, particularly across the pond in Europe, caught the reporting, too. To Henrik Sternberg, a professor in supply-chain studies at Iowa State University, the reporting that U.S. Homeland Security Investigations units had found some patterns of violations along the border rings very familiar. In Europe, he was part of a research project to document violations that partly contributed to halting the European Union’s efforts at wide deregulation of cabotage restrictions.

The economics of the situation in Europe are in some ways more stark than in the United States, where the compensation differential between an employed U.S. company driver and a driver in Mexico is a fraction of the difference between, say, “a driver in Germany and Bulgaria” in Eastern Europe, Sternberg says. Bulgaria, a former Eastern Bloc country under sway of the Soviet Union through the 1980s, joined the European Union only in 2007.

Sternberg, formerly with a home base in Sweden, offers an example from analysis published earlier this year that showed hourly costs for truckers in Denmark at the equivalent of around $50 an hour (including applicable taxes and benefits paid by carriers), while a Bulgarian trucker might cost the equivalent of as little as just shy of $4 an hour. Initially, he says, the European deregulation of cabotage restrictions for EU member states allowed what was called “temporary” cabotage, or an unspecified number of movements on a temporary basis within countries that were foreign to the carrier making the movements.

Forced to define temporary by industry participants, the EU ultimately settled on the allowance of no more than three domestic movements in another country in a week’s time. (Keep in mind, distances of such domestic movements in most countries in Europe are analogous to intrastate hauls in average-size states in the U.S.; easily completing more than one haul in a single day would not be uncommon in many.)

Given obvious difficulties enforcing such a limitation, what ultimately happened as more former Eastern Bloc states joined the EU, Sternberg says, was a flouting of cabotage rules on a grand scale, though official EU statistics didn’t come anywhere close to reflecting the reality. Truckers in Western and Northern European countries could see it plainly everywhere they went, and Sternberg notes a study that showed as much as half of the domestic Austrian fleet had either failed or moved abroad to take advantage of the economics of the situation.

Sternberg himself came to a partial solution for at least documenting the scope of the rules flouting, having realized its extent talking to Swedish truckers and then “standing at the ports counting trucks” himself, he says, trying to confirm official EU volume statistics.

He created the CabotageStudien smartphone app and got buy-in from around 10 percent of Swedish truckers to use it to record and share observations of other hauling units they observed over the course of their days. He pitched it to truckers this way: “This is your chance to show politicians and police what kind of vehicles are on the road,” he says. 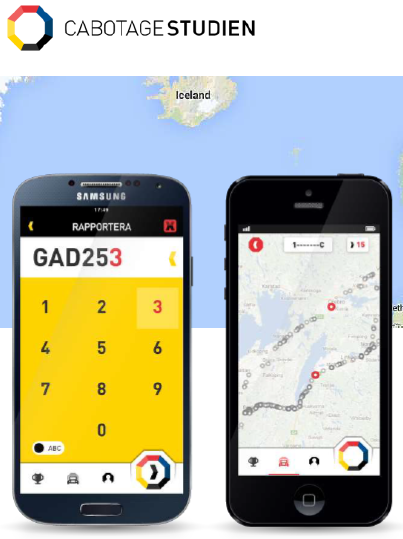 The app enabled driver users to report plate numbers and captured position locations of the reports, from which Sternberg was able to create maps of particular registered trucks’ movements. He shared with me a snapshot of 15 weeks’ worth of data from inside Scandinavia, which showed that of more than 500,000 observations encoded in the app by drivers over the time period, trucks domiciled in Eastern European countries dominated among foreign haulers there, contrary to official statistics.

In some instances, for some plate numbers, Sternberg was able to clearly show Bulgarian companies’ units for weeks at a time inside Sweden, in some instances confirmed by whistleblower drivers among the Bulgarian community who shared data points from their trucks’ GPS trackers with his research team.

Overall, the number of participating truckers “was sufficient to get a really good dataset showing how many thousands of foreign vehicles were inside Sweden and how many were overstaying and doing in-country transports,” Sternberg says. The app has spread well beyond Sweden at this point and is being used in “northern and western European countries” as a cudgel against flouting of the rules. Reporting around the results, Sternberg says, has in part led to a “deadlock on deregulation” of cabotage among EU leaders. That deregulation had previously been on schedule to occur in 2014.

Some shippers in the EU have become aware of the problem to the extent that they advertise their use of specific carriers. On the website of one of the EU’s biggest electronics retailers, for instance, says Sternberg, the company advertises “the carriers they are using” and their “collective bargaining equivalents,” or how they stack up for driver compensation in relation to a typical union contract.

The particular problem investigators describe out of Nogales, Ariz., along the Southern border is different in some ways. It’s something of a hybrid illegal-workforce/cabotage-related matter, as described by Homeland Security Investigations, involving the tapping of international cross-border truckers to run domestic point-to-point loads in otherwise U.S.-legal power units. Reporting of plate numbers isn’t going to exactly illustrate that issue.

Yet perhaps the flouting of cabotage rules by otherwise legal international carriers is more of a problem than we know. Reader Raymond Thompson wrote in with a recollection of a case from the early 1980s in which a U.S. driver who delivered a load between Ontario and British Columbia on Canada’s West Coast “got caught because he crossed through the U.S. and then crossed back into Canada,” Thompson says. (A different owner-op consulted for this story recalled his own 1980s use of a magnetic sign advertising, falsely, his own power unit as a not-for-hire part of the “Belarus Machinery” private carrier in order to gain access to the Port of Montreal hauling equipment from Soviet-flagged ships that no U.S. longshoreman would touch at the time.)

Today, Thompson says, “I believe there are illegal activities happening,” citing the profusion of dual-registration vehicles with both Mexico and U.S. plates, most often either Texas or California.

Mexico’s federal license plate is not part of the International Registration Plan, thus the necessity of dual registration for trucks operating outside of the border commercial zone, whether for Mexican carriers that are part of the interstate long-haul cross-border program or, more common, gain intrastate authority in those two massive in-state U.S. markets, says Joe Rajkovacz of the Southern California-based Western States Trucking Association. He also noted the need for anyone to be cautious making any assumptions about dual-plated vehicles, because many Mexico-based companies actually have ownership on both sides of the border, with both U.S. and Mexico citizenship, thus enabling them to fully participate in both trucking markets.

But Rajkovacz also notes that Mexico-domiciled carriers as a general rule need an agent and location in California to get a California plate, and with that can get intrastate authority within California. “The same thing happens in Texas,” he adds. “Texas and California are unique to this issue, because of the size of their economies,” both bigger than the Mexican and Canadian economies by domestic output. Such carriers employing Mexican drivers on point-to-point runs within those states, however, are clearly violating the rules for drivers on B-1 (business-visitor) or other visas.

“To me the story is American employers gaming the system for profit,” Rajkovacz says. And getting away with it. “The reality is that federal officers aren’t going to be pulling over a truck dual-plated on I-35 in Dallas,” which again for international-shipments purposes could be entirely legal. (State enforcement officials, meanwhile, can’t enforce cabotage rules, thus as Thompson points out, dual-plated trucks using drivers that are skirting visa status to haul point to point in the U.S. might also easily escape much attention during the routine state-conducted scale checks you’re all accustomed to.)

It’s easy to overstate the significance of the problem in long-haul markets, Rajkovacz adds (where he speculates Canadian carriers are probably the more guilty party when it comes strictly to cabotage in the U.S.), but it’s a real one in intrastate hauling in the border states, as is the local/intrastate use of Mexico-equivalent CDL holders who “cross daily from Mexico … I’m well aware of employers” who do that in California. “That is, under federal law, illegal. The U.S. Department of Labor has never declared the occupation of trucking in short supply – the visas they get are not related to trucking; they’ll be for some other activity.” Employers attempt to justify it “by saying there’s a [U.S.] driver shortage, but many of us believe it’s an economic advantage they are exercising.”

That sort of thing is well outside of cabotage, strictly speaking. Nonetheless, Rajkovacz and other watchers see some hope in reports of some significant enforcement attention to these issues.

As for crowd-sourcing plate information via a project like Sternberg’s European efforts around cabotage, such a project might let us know whether a similar issue is as widespread as some believe in the large-market border states, though given so many grey areas it’s hard to tell. Sternberg’s scheduled a trip to Arizona in the near future to talk to officials and carriers to attempt to describe what the outcome of any further relaxation of international trucking regulations between Mexico and the U.S. might result in, he says.

Also, he emphasizes that for any crowd-sourcing method of road observation to work “it takes a critical mass of people” as participants. If and when “I feel there is enough support from drivers who want to show what is happening on the roads, I’m going to launch it.”

For now, if you have information about cabotage infractions that illustrate the issues, you can contact Sternberg directly via henrik [at] iastate.edu. (Those interested in further reading can access via this link a Sternberg-authored research paper on crowd-sourcing as a means of addressing a variety of transport-related crimes, published earlier this year.)