I spoke briefly with relatively new independent owner-operator Isaac Ho last week. In a sense, he’s emblematic of the turn of so many in trucking as an owner-operator to independence with carrier authority over recent times, as rates spiked in 2017 and into last year with the ELD mandate and everything looked, at least relatively speaking, hunky dory from a freight and rates perspective.

“Rates have come back to reality.”

White’s been realistic about all that from the get-go, including when we discussed the potential for a rates bonanza ahead of and following the ELD mandate’s late-2017 first enforcement deadline (our conversation at that time well preceded when things really started to run up during hurricane season in late-summer that year), particularly when it comes to spot freight, he added. “If 25 years have taught us anything, it’s that this is all cyclical.” The approximately 20-truck, Hartsville, Tenn.-based fleet is “doing fine,” he says, in fact in something of a hiring mode since it “picked up nine new lanes for an existing customer” under contract and needs people to cover them.

Those spot rates falling so hard doesn’t portend well for contract rates in the future, of course, though volatility isn’t quite the contract-rates watchword it is for spot rates. If a strong Spring spot season materializes, things could change.

What’s to be done in the meantime? Keep tight control of what you can. New owner-op Isaac Ho was biding his time last week in hopes rates would get better for him via the mostly digital brokers’ platforms (Uber Freight, J.B. Hunt 360) and other online load platforms he uses. Heading into the rates crash, furthermore, he used the relatively brief good times to advantage, counting costs closely and paying down the note on his 2015 Volvo entirely (purchased used initially with time left on the factory warranties), after just more than a year with his authority.

“Last time we talked to a broker, he said something like, ‘You’re lucky you’re in Chicago,'” Montgomery, Ill.-based Ho says — the broker went on to reference some rates he’d seen out of the Northeast at a paltry $1.10/$1.20 a mile, no more than an owner-op can get leased to plenty carriers on a per-mile-pay basis (and there without the added insurance costs and so much more). Insurance is a particularly huge and growing expense for many new owner-operators with authority, given the influx of so many and a limited number of insurance companies who will even consider a new business.

Premiums are through the roof for many new owner-ops.

When “things started getting really good on the spot market,” Ho notes, “I came out here with everyone else and was making good money and then it really dropped through the floor. There were all these people coming out and saying that it would be great for years and years and years” when it comes to rates and freight. “A lot of people went out and overextended and bought plenty of stuff based on” what the more rosy among prognosticators had said. “Luckily, I didn’t go for that hype. I paid my truck off  and I was trying to buy my trailer” — he’s still under a straight lease with his van, having hit roadblocks on a trailer purchase.

“At least my truck’s paid off,” he adds. It “cut my expenses in half. If things go terribly crazy, I can just park my truck and go drive  for someone.” 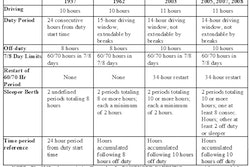 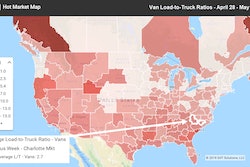 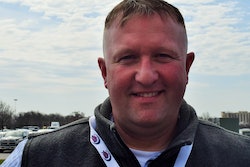