Regular readers will recall Eagle Express small fleet owner Leander Richmond from past coverage of his sometimes aggressive efforts to not only wrangle brokers he works with toward an equitable approach to compensation for excess detention and acceptable contracts, but around the subject of what he sees as increasingly predatory booting of truckers parked in non-designated spaces. In too many cases, he believes, so-called “parking enforcement” companies are using questionable methods and even more questionable penalties to ply their trades, booting and holding hostage trucks while drivers sleep, not giving drivers occupying the vehicles ample opportunity to simply move the truck from lots that are poorly signed “no truck parking” — if signed at all.

Richmond has launched a new website with the ReportaBoot.com referral URL to his TruckingBoots.com site that is intended to collect booting incident reports directly from drivers and carriers from the last few years, and in ongoing fashion — with a mind toward gathering enough information to potentially spur either legal or federal/state legislative or regulatory action to tamp down particular practices of the “parking lot pirates,” as he calls them.

His principal goal is fairly simple — “if we can take 500 to 600 [or more] cases of this” and present it to the right authority, “maybe they’ll put in a very simple law to say that if the driver’s in the truck, you have at least to give them the opportunity to move.” As drivers are encountering boots of various types around the country, he hopes many will “submit their information via the website. We’ll compile it and get this to someone that can make a difference.” 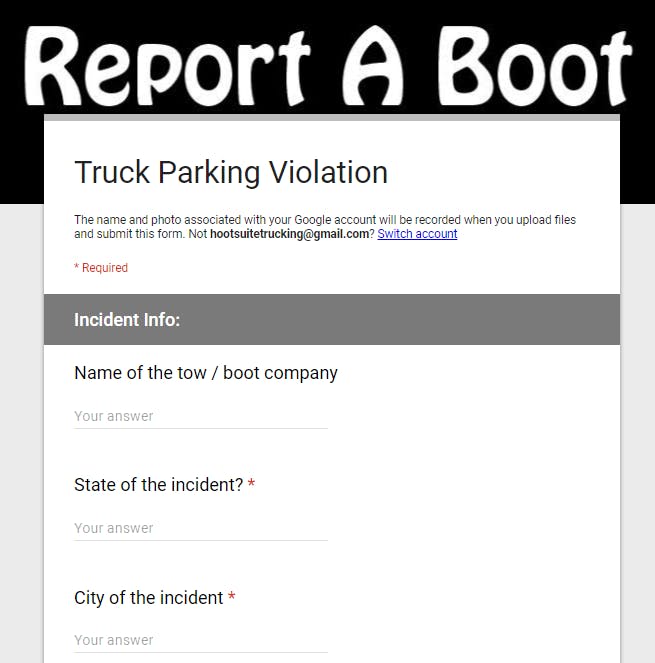 Richmond stresses he’s well aware of property owners’ complaints in some instances about trucks using their lots. “We’re not trying to take the property owner’s right to compensation away,” he says. “We’re just trying to combat the middlemen” engaged in egregious practices, in some cases what he believes amounts to extortion, holding the driver and his vehicle hostage without the simple opportunity to correct the problem by moving the truck.

As has been noted by many truckers the last year and more, given the hours of service enforcement realities today and relatively new prevalence of electronic logging devices, the need for parking in busy corridors has become a more pressing one, the proliferation of advance reservation systems a clear indicator. Richmond believes there’s been a corresponding uptick in businesses “contracting with property owners by selling a ‘parking enforcement service.’ All they’re really doing is laying in wait for someone to park there,” he says, whether at an otherwise vacant lot or at a location not specifically designated for truck parking.

Often enough such a contractor may be a towing company with an agreement with the owner, but increasingly the “enforcement service” could be little more than guy driving a four-wheeler with a so-called “windshield boot” in the trunk. He finds a parked truck where it’s not supposed to be, opens his trunk and pulls out what Richmond describes as a windshield-sized cover — often bright yellow — that attaches to the windshield with suction. “It’s almost impossible to get off the truck,” he says.

On the form he’s set up via the ReportaBoot website, dates/times and other details of the incident can be specified, and drivers who’ve received a receipt for payment can upload a copy there, too, potentially helpful no doubt to prove the extent of the fees collected.

He stresses information about incidents that are two-three years in the past could be helpful in addition to any immediate situation encountered as the days go by. Given high levels of frustration drivers are experiencing around parking, he says, “if the government doesn’t step in and apply some kind of rule-set to this thing,” he fears a volatile situation getting well out of control.

“Drivers are frustrated already,” he says. “An entire week’s worth of a paycheck just for parking somewhere? Come on.” He tells of one incident where a windshield boot was applied and the booter wanted $700 to have it removed. An angry driver made the nonetheless cold-hard-facts calculation of what it might cost to replace the windshield and, rather than pay the fee, “just kicked out his own windshield” and moved on.

Richmond’s hopeful his efforts can prevent further escalation in the future. For those who participate, too, “in some cases, maybe we can get them their money back,” he adds — he’s had some success there with his own fleet’s booting incidents of late. 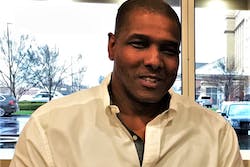 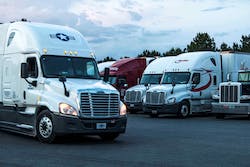 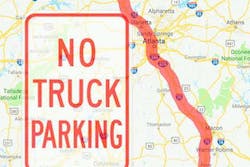 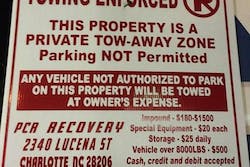