I know the group isn’t the only one to do so (and they’re certainly not alone given the viewpoint of so many in this audience), but I found the Specialized Carriers & Rigging Association’s commentary offered on the FMCSA’s hours of service proposal worth highlighting for the simple fact that it closely mirrors what I’ve heard so many truckers who remember the split-sleeper-berth rules of days gone by over the years. Namely, that’s something along these lines: Let us split as we see fit.

You can find their full commentary on all the provisions, which they support in varying degrees and in some cases urge the agency to go farther for flexibility/safety’s sake, via this link. (Some overdimensional haulers among association members, you might recall, are already operating under an exemption from the 30-minute break already. Given that exemption and no adverse safety impacts from it, SCRA recommends FMCSA scrap the break entirely.) Here’s the full text of the group’s commentary on what FMCSA proposed for splitting the sleeper berth, essentially allowing up to a 7/3 split, and with other modifications allowing the shorter period to newly pause the rolling 14-hour clock, not how it works in the current split.

SC&RA strongly urges FMCSA to reinstate the option for splitting up the required 10-hour off-duty rest break for drivers operating trucks that are equipped with a sleeper-berth compartment. However, rather than limit the modification to a minimum of 7/2 or 2/7 split (total must be 10 hours but a minimum of 2 off duty and 7 sleeper berth), with at least seven consecutive hours being in the sleeper berth, the Agency should allow splits that reduce the consecutive hours in the sleeper berth to 5 or 6.

The old-style split sleeper berth rule allowed a driver to split up the sleeper berth in two segments and one of them being at least two hours long. A driver could do segments of 2 hours and 8 hours to get 10 hours, or he could do a 3 hour and a 7 hour, or a 5 hour and a 5 hour, or whatever a driver needed to use. Being able to do that would allow drivers to use their time (driving, resting, on duty not driving) to their best advantage. The driver could use his or her time effectively and get some rest when needed. Once again, these issues are acute for drivers of overdimensional loads. For example, many drivers face curfew zones around major metropolitan areas, requiring movement during only certain hours. This, in turn, often prevents drivers from taking sleeper berth at for long stretches but allows shorter sleeper berth time when waiting for curfews to expire. While these drivers wait in staging areas while waiting to transition between day time and night time moves, short sleeper berth periods are readily available.

Moreover, when drivers are required to work with nighttime state, county or city requirements, the Split Sleeper Berth rule change would allow drivers to get to safe havens/parking for additional required HOS rest. By way of illustration, the attached Records of Duty Service (RODS) show an actual example of a driver having to wait in the sleeper berth in a staging area for the George Washington Bridge into New York City to be shut down so an overdimensional load can be escorted into the city. In example one, the driver may not get a full eight hours’ rest before the shutdown occurs and, thus, would be over hours of service under current regulations.

The second example shows that a split sleeper berth would allow the driver to make the crossing legally, get to the customer’s location, then go into the sleeper berth for the night and be in compliance again in the morning.

Allowing split sleeper berth times of 6/4 or 5/5 would not adversely impact safety but, rather, would allow drivers flexibility to get rest in increments that are most conducive to their work. The Split Sleeper Berth modification is in part based upon the studies that FMCSA has already done on sleep. These studies show that allowing a 6/4 or  5/5 split achieves the same safety goals as the proposed 7/3 split while allowing drivers increased flexibility.

Available data shows that allowing employees to space their rest periods [can result in] adequate rest, while supporting the flexibility needed to allow drivers, including drivers of overdimensional loads, to account for traffic conditions, local overdimensional regulations, and parking shortages. Indeed, recent studies conclude that “Divided sleep [as little as five hours] is as good as consolidated sleep,” and “with respect to total sleep time and sleepiness, the findings of the present study suggest that split sleep is preferable to consolidated daytime sleep.” [SCRA makes reference here to the study conducted by researchers at Washington State University back in 2013.] …

I suspect that there are a lot of you who’d second SCRA’s commentary here, and that I’m likely to find similar among attendees of the National Association of Small Trucking Companies’ annual conference here in Nashville, where I’ll be this afternoon and tomorrow. If you’re in town at the event, it’d be great to meet you in person. Drop a line this way! 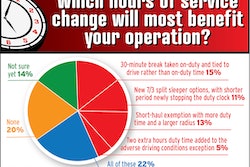 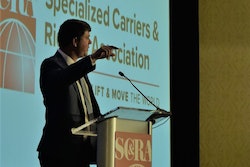