Caught up with an old friend and collaborator this morning as he was in the middle of a reliable Texas-Florida-back home triangle pulling a Moeller Trucking reefer — that’d be our own Paul Marhoefer, of course. I wanted to share the new song (see the video above) from well-known songwriter/performer Mary Gauthier, songwriter Darden Smith (part of Gauthier’s songwriting project with U.S. military veterans that Marhoefer wrote about at this link), and … yeah, that’d be none other than Marhoefer himself on a socially-distanced cowrite with the pro pair.

The “Truckers & Troubadours” title sprung from Marhoefer’s mind, he says, as did a basic little melody, from which the three then spun out the rest, performed by Gauthier in a video put together by well-known video man James “Tex” Crowley of the Texas Media Foundry. Working with Gauthier and Smith Paul likened to being a part of a “pick-up basketball game with Michael Jordan and Larry Bird.”

The track was recorded from quarantine then by Gauthier using nothing more than an iPhone with an external mic in addition to her built and God-given instruments. A little mastering magic was done by a frequent Marhoefer collaborator of Milk House Studios in Richmond, Indiana, Jeff Templeton. It’s a great track, about road warriors with more than one common bond, in good times and bad.

More from Gauthier via this link.

Truck-run to the drive-in at Riteload’s headquarters
In some ways, Matthew Kane’s Riteload shipper-carrier connection engine, as he noted in the report here from yesterday, is in as tough a situation as any right now — the business was a week or two from moving furniture into a big new headquarters when his area (Southampton, Penn.) went on lockdown as COVID-19 made its spread. Now, “I’m paying for my old office and for my building here and I can’t work in either of them.”

Efforts continue to build freight in the system, and he says shippers still posting there haven’t dropped rates in the manner that’s been seen in the brokered spot market — he’s expecting some loads of Michigan-origin asparagus to start hitting any day now, among other loads, though volumes on the platform are down.

And … the big parking lot at the new building has for a few weeks served at least some function.

Kane’s been hosting drive-in movies for the community there. And yes, he says, “truckers are invited.” Some he knows north of him in Pennsylvania “do these truck runs, and asked if I had room to bring in bobtails.” Indeed. The audio transmits to an FM frequency, and during the showing the van is set up on a roll-off for better visibility, as can be seen in the video stream from last week’s event below.

“The people who have come have had an absolute blast,” Kane says. “It’s a great way for people to get out of their houses. It keeps the social distancing in play.” So far, they’ve shown Ferris Bueller’s Day Off, Sand Lot, Ghostbusters … This week? Beetlejuice, he says. Keep tuned to the “Back to the Future Drive In” or Matthew Kane’s own Facebook pages. 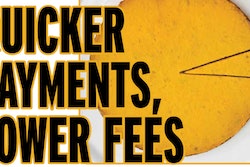 POLL: Do you employ a factoring company for collections assistance? 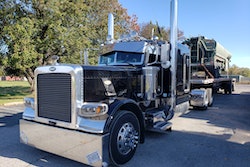 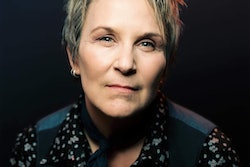