Trucker John Grosvenor pointed out a somewhat overlooked item in the House version of a long-term highway bill, the INVEST in America Act, on Sunday on his and owner-operator Shawn Mitchell’s hosted Truckers Independent Broadcast Network online show, where I sat in and talked a bit about the insurance-related language in the same bill (see my quick thoughts on that provision below).

The overlooked item is one that seems positive, at least on its face, for the interests of small-business truckers like owner-operators.

In addition to extending the existence of the Motor Carrier Safety Advisory Committee out to 2025, language around the MCSAC’s statutory makeup would be amended to specifically reference “small business motor carriers” as part of the “motor carrier industry” required to be represented in the committee.

Outgrowth of what that means exactly can be speculated to move in a few different ways — it probably all depends on how you define “small business.” In some ways, MCSAC’s current makeup does in fact include those representative of small business motor carriers in longtime committee members Todd Spencer, head of the Owner-Operator Independent Drivers Association, and Danny Schnautz, who’s with a 150-truck fleet in Clark Freight Lines. Spencer is obviously a voice for owner-operators on the committee, and Schnautz I’ve known also as someone who is quick to put things into an independent trucker’s perspective.

Yet plenty watchers among grassroots advocates like Grosvenor and others have long wished for a representative on the committee who’s perhaps closer to the on-the-ground, day-to-day perspective of the independent carrier business owner, whether operating with authority individually or with multiple trucks, someone with dynamic, lived experience undergirding their insight on achieving that sometimes challenging balance between safety and competitive business.

If the additional emphasis on “small business motor carriers” in statutory language provided in this bill survives and ultimately results in a new seat or two on the committee for someone fitting such a bill, then it’s a win, as Grosvenor characterized the highway-bill language generally in introducing his show yesterday.

Schnautz, for his part, is in agreement with folks like Grosvenor. “Considering that the small trucker makes up a large percentage of the trucking industry” when it comes to the number of businesses particularly and considering the large number of leased owner-operators, too, he said, “I think that small truckers are currently under-represented on MCSAC. A one- to five-truck fleet guy or gal would make a great addition to the board.”

It’s one that “endeavors to use trucking industry expertise to bring up inside-industry information” to inform regulatory decision-making, in general, he added. The safety groups and law enforcement reps don’t have much of that, he added, “and so I believe are over-represented there.”

Those from the enforcement and safety community currently account for eight of the total 18 members, or very close to half of the entire committee.

At one meeting some years ago, Schnautz shared, “it was concluded that only three people around the table had a CDL,” including Schnautz. The conclusion came in response to a question from a member of the public who was in attendance at the meeting (which are always open for public attendance).

I’ll note here that the MCSAC’s current member slate of 18 is 2 shy of its possible 20-member complement. If this language in the House bill survives to become law (a big if, given the road ahead for any House-produced legislation in the Senate other than the most noncontroversial of items in this particular climate of off-the-charts rancor), look out for a Federal Register notice from the FMCSA about its committee and potential new-member nominations, I might guess. At once, it’s been close to a decade (since 2012), I believe, since the committee and FMCSA have reached out in a public way on nominations like that.

I’m reminded of what Joe Rajkovacz of the Western States Trucking Association once said he felt about reps on that committee — that they “should have greater industry representation with members serving on a rotating basis — not in perpetuity,” as I wrote at the time (2016). (When it comes to smaller-trucking interests, Schnautz and Spencer are both very-longtime committee members.)

Change was “in the air” then, no doubt, not just for the regulatory outlook I was writing about then but also for the MCSAC itself. Since the Trump administration took office, the committee has met just once a year, likely given the general administration’s antipathy toward new regulation (though a great bit more work on streamlining what’s on the books now could well have been undertaken — maybe a missed opportunity thus far). Before Trump took office, the MCSAC and related subcommittees might meet four-five times a year, considered together.

In this election year, whatever the results, change may be in the air yet again, from hours to insurance to CSA and the committee itself. Just where these issues end up, of course, remains to be seen.

The MCSAC meets virtually for the first time this year next week, July 13-14, from 9:15 a.m.-4 p.m. Registration for each day can be made through this link to attend. Committee tasks on the docket for discussion include discussion of the safety patterns of under-10,000-lb. commercial vehicles (think cargo vans, for instance) delivering small goods and the impact of an aging workforce on interstate commerce. FMCSA plans, too, to brief the committee on the “impact of the legalization of hemp on the safety oversight” of drivers.

Finally, the insurance provision
The House’s highway bill, among other measures if passed, would boost required liability insurance minimums to $2 million for non-hazmat carriers. My best brass-tacks thoughts on that proposal? It’d be an added cost to carriers that probably feels like adding insult to injury in the current environment, coming out of the a huge hit so many took with the COVID-19 shutdowns and the ongoing uncertainty around future business for those and others. Also, it most likely would affect the smallest of carriers more dramatically than the largest, and especially small carriers with a shorter business history than those with longer histories, given the way the market for commercial auto liability has developed in recent years. Prices are up for everyone, but the curve is highest for entry-level carriers. 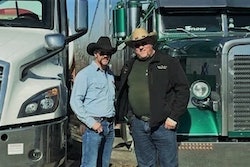